Looking Back on Extension’s 100th Anniversary

2014 has been a memorable year for number of reasons–some good, some not so good. But for thousands of Extension agents in Florida, and tens of thousands more across the country, 2014 was notable for one very important thing: it was the 100th Anniversary of the Cooperative Extension Service in the United States. In 1914, the U.S. Congress passed the Smith-Lever Act, which established the funding states needed to bring science-based agricultural and home economics education from land-grant universities to the public. Smith-Lever represented a huge leap forward in improving public education, the production and safety of agriculture, and the quality of life for millions of Americans. A birthday this significant could not go uncelebrated. Centennial events throughout the year served as an opportunity to raise public awareness about Extension, as well as discuss Extension’s role in providing education to solve the problems of the next 100 years. But mostly, it was an opportunity for people to have fun and celebrate Extension’s 100-year history of service to the people of Florida. The anniversary year actually began in the fall of 2013, when a group of full-sized standup photos of Seaman Knapp, Hoke Smith and Asbury Lever began circulating through county Extension offices around the state.

The year’s events began on January 31, when Florida A&M University held a Centennial Kickoff Celebration at the Perry-Paige Auditorium on the FAMU campus.

The Florida State Fair in Tampa in February offered an excellent opportunity for fair-goers to learn about Extension’s many contributions to public education, and the Extension exhibit attracted thousands of visitors and dignitaries from around the state.

April 17 saw a large anniversary party on the UF campus. Extension personnel from all over the state came to see exhibits, enjoy fresh-from-Florida food, and listen to distinguished speakers, including Commissioner of Agriculture Adam Putnam, IFAS Vice President Jack Payne and Dean for UF/IFAS Extension Nick Place talk about the past, present and future of Extension.

May 8 was the actual date of the Anniversary, and it involved simultaneous celebration across the state and nation, while an official convocation was celebrated in Washington D.C.

Throughout the year, many county Extension offices celebrated the centennial with open houses, proclamations in state and local government, and other special events. Social media helped to spread the word about Extension celebrations, and along with news programs, newspaper stories, interviews, and press releases, helped to raise awareness about the good work Extension does in local communities.

In September, UF/IFAS’ exhibit at The Sunbelt Ag Expo in Moultry Georgia focused on the theme of Solutions for the Next 100 Years. Vistors to the exhibit could follow a giant timeline of Extension’s century of accomplishments and see demonstrations of Extension education.

It has been a pleasure to document the Extension Centennial, as well as to write the Extension History blog. We will be continuing to mark Extension’s milestones through social media on “Throwback Thursday.” However, a new year will soon be upon us, and it’s time to focus our energies on what UF/IFAS has always done best: looking toward the future and working cooperatively to help the people of Florida find solutions for the next 100 years.

And in case you missed it, here is a list of Florida Extension History blog entries that ran 2013-14:

Speaking for the Trees

Helping Florida Save for 100 Years

Like a Day Without Sunshine: The Past and Future of Florida Citrus 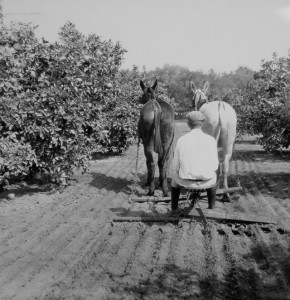