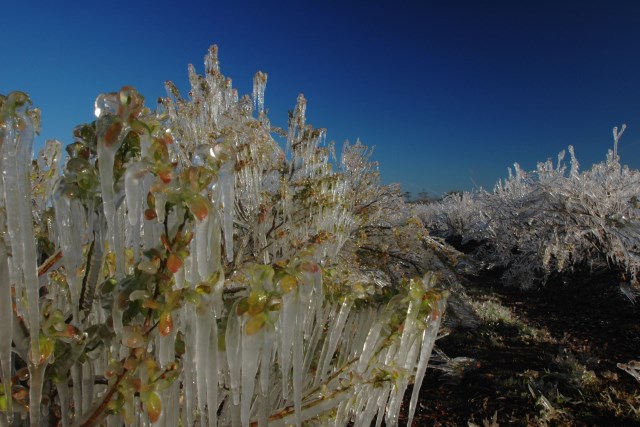 When growers in central and south Florida turned in on the night of January 18, 1997, most of them expected that the next day would be much like the last. Weather reports on the local news were predicting overnight lows in the mid to upper 30s—cold, but not cold enough to affect their winter vegetable crops. Instead, they awoke to a devastating freeze, which would ultimately cause over $300 million in damage, leave nearly 100,000 migrant farm workers displaced or unemployed, and affect supermarket produce prices for months to come.

How did forecasters and growers get caught off guard? In April of 1996, the National Weather Service discontinued its agricultural weather data collection and advisory programs, saving the NWS an estimated $2.3 million per year. As a result, growers were getting their weather reports from the local news, which rely on data collected at city and airport sites—typically five to ten degrees warmer than rural sites. Without accurate temperatures to warn them of the freeze, growers didn’t take the usual precautions of coating their crops with a protective layer of ice or saturating the soil with warm water.

The freeze of ’97 exposed an urgent need for accurate, real-time weather data available for agricultural producers and researchers throughout the state. In response, a task force was formed composed of growers’ associations, state agencies and educational institutions, including UF/IFAS, who ultimately provided the solution. Extension agent John Jackson and senior computer support specialist David Ayers had already been developing an experimental weather network in Lake and Orange Counties. Jackson secured $125,000 in state funding, and within a year, and he and Ayers created the Florida Automated Weather Network (FAWN).

FAWN is a system of solar-powered weather stations, set up in farming areas around the state, that collect data about air and soil temperatures, wind speed and direction, rainfall, relative humidity, barometric pressure, dew point, and solar radiation. Every fifteen minutes that information is relayed to a database, which anyone can access via the FAWN website (http://fawn.ifas.ufl.edu). To get FAWN off the ground, Jackson managed the funding and administration, Ayers designed and engineered the sites, and UF/IFAS associate professor Howard Beck developed the database. FAWN went online in 1998 with 16 stations and quickly grew.

Today, there are 41 stations in the FAWN network and the website has expanded to include long-term climate data, tools for pesticide application and cold protection, and irrigation schedulers. Rick Lusher, who manages FAWN today for UF/IFAS, estimated in 2009 that FAWN’s cold protection tools can save growers as much as $13 million in reduced water use alone.

Sixteen years after it was born out of a bitter freeze, FAWN is an unqualified success story and a perfect example of how UF/IFAS Extension puts science to work to solve problems that affect us where we live. ← Boll Weevil and Hog Cholera: How Pest Infestations Helped Extension Gain a Foothold in Florida﻿
Adding 100 Years of Extension Video to a PowerPoint →