Skip Navigation or Skip to Content
Home » Communications » Who Are These Guys?

Over the next year, you’re going to see a trio of well-dressed, monochromatic gentlemen crop up in the oddest places. To raise awareness about the 100th Anniversary of Extension in Florida, life-sized cutouts of the principal founders of the national extension service are making their way across the state.

So, who are these guys?

Seaman Knapp (1833-1911) is the pioneer of modern agricultural demonstration. Knapp began his career as an educator in New York and Vermont. When his health compelled him to move with his family to Iowa, he took up farming and began experimenting with modern agricultural techniques. Eventually, he moved to Louisiana, where his success as an agricultural educator drew Northern farmers eager to try his techniques and demonstrate them to others. In 1902, Knapp was made a special agent to the USDA. He was soon sent to to Texas, where he worked with a farmer named Walter Porter to set up a demonstration farm to combat the Boll Weevil infestation that was just beginning to devastate the South’s cotton crop. The Porter Farm experiment was a success, drawing national attention to the advantages of agricultural research and demonstration. In his later years, Knapp fought for federal aid to extend demonstration work throughout the South. His efforts would eventually lead to the signing of the Smith-Lever Act in 1914.

Hoke Smith (1855-1931) is the co-legislator of the Smith-Lever Act. He was born in North Carolina and moved with his family to Georgia in 1868. After practicing law in Atlanta, he became active in Democratic politics and served as Secretary of the Interior in Grover Cleveland’s cabinet from 1893 to 1896. He was twice elected Governor of Georgia, first in 1906 and again in 1910. Although Smith’s administration included many progressive reforms, such as public school funding and a juvenile court system, he also backed a state constitutional amendment that would disenfranchise African-American voters. Smith served in the U.S. Senate from 1911-1921, where he co-sponsored the legislation he is best remember for, the Smith-Lever Act, which established federal funding for agricultural Extension work in each state. 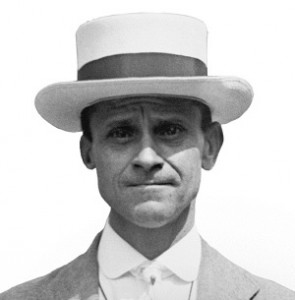 Asbury “Frank” Lever (1875-1940), co-author of the Smith-Lever Act, was born the son of a South Carolina farmer. Developing an early interest in politics, he came to Washington D.C. in 1897 as private secretary to Representative J. William Stokes. Lever was elected to the U.S. House of Representatives upon Stokes’ death in 1901, and he would serve in congress for the next 20 years. His legislative career included many achievements that improved the lives of farmers, such as the Cotton Futures Act of 1914, the Federal Farm Loan Act of 1916, and the Food and Fuel Control Act of 1917. But he is best remembered for establishing the national agricultural extension service through the Smith-Lever Act of 1914. Toward the end of his life, Lever helped to bring the circle that created Extension to a close when attended the ceremony to dedicate an arch at the USDA Building to the memory of Seaman Knapp.

To find out where these guys will turn up next, visit: