A Viable Wireless Mic for Your iPhone or iPad

Are you getting weary of low quality audio when recording on your iPhone or iPad? You know, where it sounds hollow and faint because you’re recording 8-10 feet away from person speaking? Or the voice of your on-camera talent fades and drops when they turn away to pick something up so you miss what is being said? If you are experiencing troublesome situations like these, then the Comica X-D wireless microphone could be worth looking into! To give you a better idea, here’s a short video:

Setup:
The X-D wireless mic system comes with 2 microphone transmitters, each with it’s own built-in microphone. The transmitters can be attached via a built-in clip to the talent’s shirt lapel at approximately the mid-chest level. However, these transmitters are a tad bulky and can be readily seen on someone’s chest. To thwart that, it also comes with a couple of lavaliere microphones attached to short mic cables. This enables the talent to clip the transmitter to their belt area and then run the mic cable up under their blouse or shirt. The actual mic can then be fed out from underneath the shirt, out to the upper chest area to be clipped to the talent’s shirt or blouse. The mics even come with wind socks for windy conditions and include a couple of spares. The Comica wireless receiver plugs directly into the iPhone/iPad lightning connector and instantly connects into the mobile device’s audio system (no Settings or adjustments needed!) The X-D does come with AC power cables to charge and keep the transmitters in good working order. However, the receiver draws power from the iPhone/iPad that it’s attached too (which need to be relatively well-charged.) 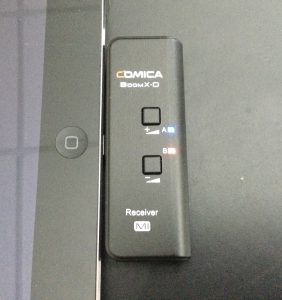 On the receiver, there is a blue light light-up indicator for each transmitter showing when audio connection is made. To truly confirm you’re getting sound, the receiver has an earphone port on the bottom so you can attach your ear buds to monitor the audio level. Then to start recording, you just open up the Photos app on the iPhone/iPad, select Video and start. When finished, open up iMovie and bring in the clips from your Media bin and take a listen!

Review:
Initial tests with the Comica X-D have shown it to be a great working tool. I submit it can even come in handy at live gatherings being streamed via Facebook Live or recording a quick presentation. Let’s say someone is speaking at a podium and rather than suffer from distant sounding audio, you just set the transmitter up at the podium and instantly have superior sound! The Comica X-D can be found online from various audio-video supply vendors, such as Amazon. It’s not overly expensive but it’s not super cheap either. However, this wireless mic system will provide superior quality audio, easily and readily. For me, it’s a win-win system!

Al is the Video Production Manager for IFAS Communications. He has been with UF/IFAS for over 35 years, producing videos in all realms of the UF/IFAS mission in Research, Extension and Education.