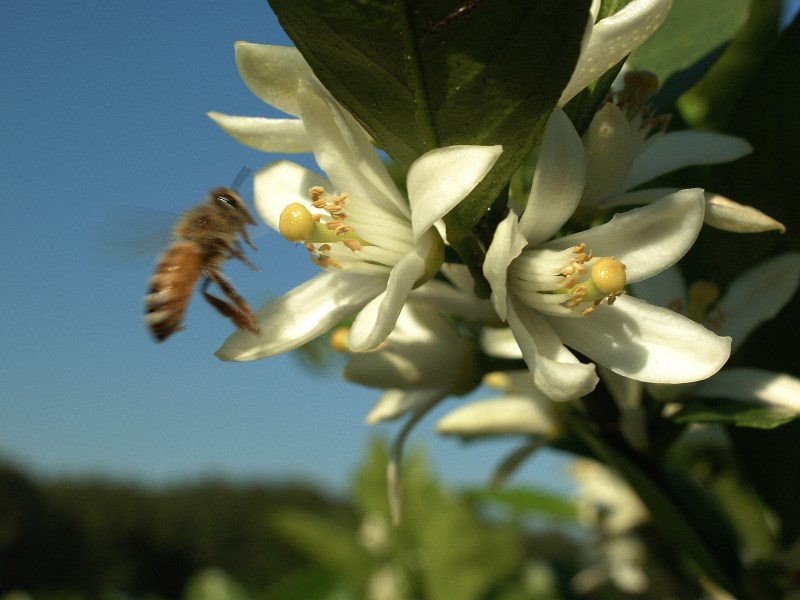 Marineland will be buzzing with college students this weekend, but not the kind that are partying on the beach over Spring Break: March 7-8 marks the 7th Annual UF Bee College at the Whitney Marine Laboratory in St. Augustine. Bee College is a two-day event that brings together UF/IFAS Extension faculty, professional apiculturists and hobbyists interested in raising raising honey bees. This year’s schedule includes more than 50 classes on everything from how to set up your own apiary to swarm management and marketing honey. There are also special guest speakers, demonstrations, a honey show, and Junior Bee College for children ages 6-16. A beekeeper handling a bee hive during a demonstration at the Bee College, 2009. UF/IFAS Photo: Tyler Jones.

UF Bee College was started in 2008 as a response to the rapidly increasing popularity of beekeeping as a hobby. That popularity has been fueled by media attention to a disturbing trend of colony losses known as colony collapse disorder (CCD). Bee College hopes in part to counter CCD by encouraging hobbyists to start their own apiaries and use best management practices to build healthy colonies.

Apiculture has been an important part of Florida Agriculture since the 1870s when the first apiaries were established at Wewahitchka in Gulf County, Hawks Park in Volusia County, and at Daytona, 50 miles south from Marineland. Reports that these apiaries were producing as much as four hundred pounds of honey per colony started a kind of sweet, sticky gold rush, with apiaries popping up all over the state. Most of these pioneer beekeepers collected wild black bees from the forest and set up their colonies on the banks of remote, slow moving rivers along the panhandle and east coast. A USDA beekeeping pamphlet from the 1930s describes a lazy day boating on the Gulf:

If we set our course up the historic Apalachicola River to the Chipola and the famous Dead Lakes and feasted our eyes on the inspiring verdure of virgin forest, if, in desire to prolong the vision, we had shut off the motor and held momentarily to some overhanging bough…the busy hum of myriad bees would reach us, soothe us and comfort us. An upward glance would disclose above and all around us thousands of fuzzy blooms, giving of their sweetness to the greatest workers in the world. You would have chance upon industry in its pristine glory–TUPELO HONEY TIME–latter part of April.

Beekeeping was a migratory business, with beekeepers moving their colonies to follow the honey flows (nectar sources in bloom) from  tupelo swamps to open pastures by steamboat or truck. Migrations were risky–beekeepers could lose everything in a wreck or sudden squall–and they often resulted in spreading disease among colonies. A disease outbreak in 1918 led the state legislature to establish an apiary inspection program. Extension work with beekeeping began in 1919 with 4-H club girls in Osceola County. Extension also worked with the newly formed Florida State Beekeepers Association to inspect apiaries. 4-H bee clubs caught on and by 1921 there were 18 colonies established by 4-H clubs throughout the state. In the bee clubs, Extension agents taught youth how to build a hive, start their own colony, control swarms and extract honey. Club members bottled the honey and sold it and beeswax candles at picnics and county fairs. During the Second World War, sugar rationing made honey the sweetener of choice; USDA and Extension booklets offered honey recipes and 4-H’ers made a tidy profit off their colonies.

In 1947 John Haynie was appointed the state’s first Extension Apiculturist to modernize beekeeping programs. He trained field and home demonstration agents, helped set up apiaries at the state’s 4-H camps, produced a number of booklets on beekeeping and honey marketing, and encouraged the planting of tupelo and other nectar-producing plants. Aside from his club work, Haynie established the first Beekeeping Institute at UF in 1957 and was instrumental in developing the state’s apiculture industry. By the time “Honey Haynie” retired in 1971, Florida had risen to become the top state in honey production, selling 25 million pounds of honey annually. In the early 1980s Dr. Malcolm Sanford was appointed Extension Apiculturist. A prolific writer, Sanford was also one of the first IFAS faculty members to embrace computer technology and the internet. In 1983 he began publishing the Apicultural Information and Issues (APIS) newsletter, the first information source of its kind on the world wide web. Sanford retired in 2001 and is the co-author of Storey’s Guide to Keeping Honey Bees. In 2006, Dr. Jamie Ellis arrived at UF to direct the Honey Bee Research and Extension Laboratory at the Department of Entomology and Nematology. While Dr. Ellis’ research team concentrates on honey bee husbandry, ecology, biodiversity and conservation, his Extension work has resulted in the UF Bee College and the Master Beekeeper Program. The Master Beekeeper Program trains and educates certified beekeepers on new research, techniques, equipment, potential problems, and tips to improve their beekeeping skills. Today there are more than 300 active Master Beekeepers conducting lectures and demonstrations on honey bees, beekeeping, native pollinators and other related topics, reaching over 3 million people in Florida. By raising interest in honey bees and educating future beekeepers, UF/IFAS Extension is helping bring bees back from the brink. A 2011 Entomology Bug Camp participant looking at a single bee while learning about beekeeping at UF’s apiary. UF/IFAS Photo by Dawn McKinstry.

← Save the Date: 100th Anniversary of Florida Extension
LAWN and GARDEN FEST →