Male Hogfish. Note the darker pigmentation on the face and steeper sloping head when compared to a female of this species.

Hogfish are a super unique and tasty species that belong to the diverse Labridae family which includes fish known as wrasses. This family of fish has over 600 species and are most common in subtropical and tropical waters however have a few members can be found more temperate temperatures like the California sheepshead (S. pulcher) in the Pacific and the Tautog (T. onitis) in the Northern Atlantic. The hogfish is the largest of the Western Atlantic wrasses (reaching lengths of up to 3 feet!) and while diving the reefs in the Southern Atlantic and Caribbean you may stumble upon their smaller, more colorful cousins the Spanish hogfish which is yellow and purple and the Cuban hogfish which is red and yellow in color. 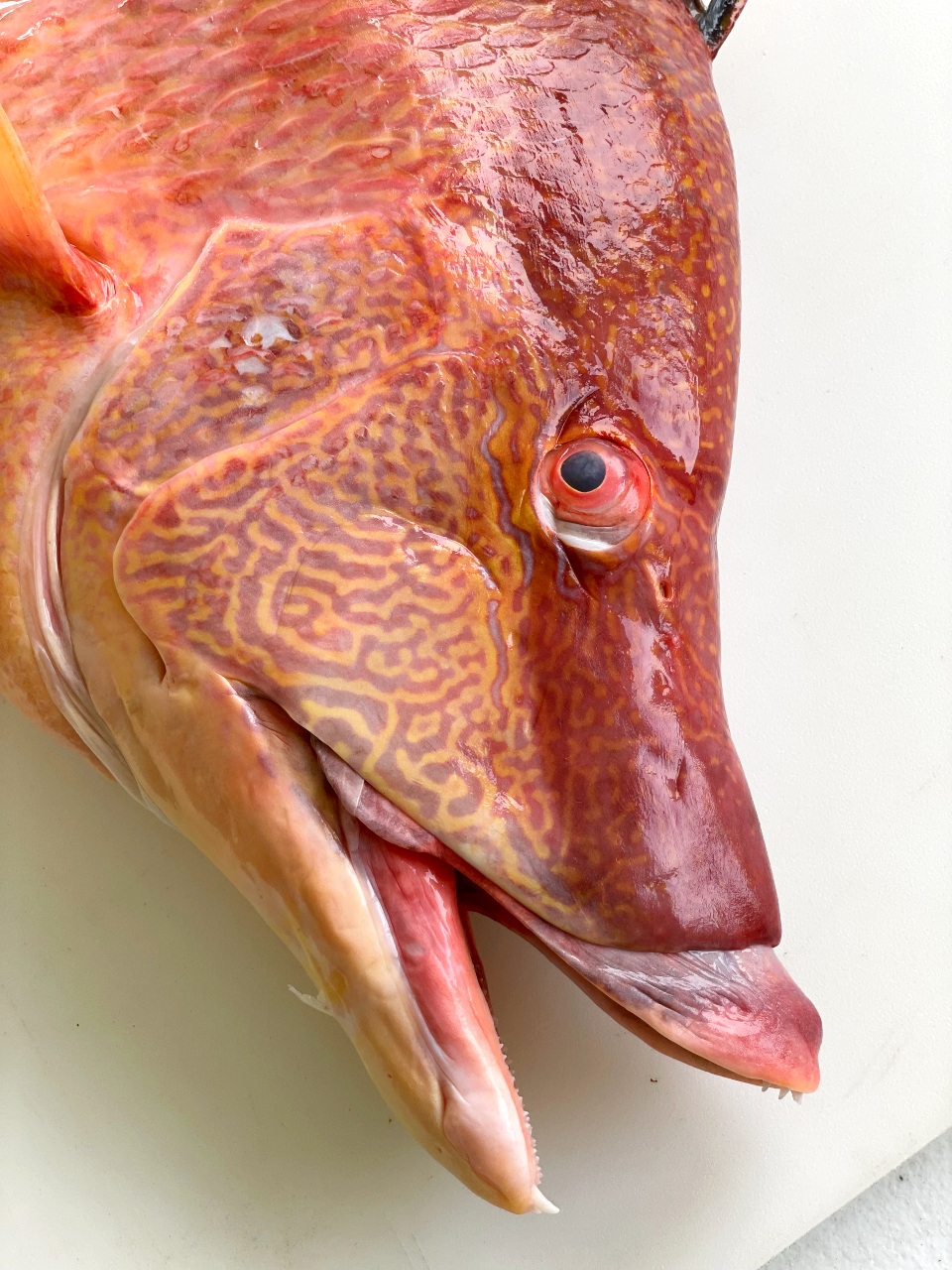 It’s hard to misidentify a hogfish as they look so distinctive and easy to spot in a crowd; however, hogfish are sometimes called hog snapper but actually don’t belong to the Lutjanidae snapper family. Its easy to see how one may be mistaken as they live in the same or similar habitats, have similar coloration and relative body shape however hogs and many species of wrasses have characteristics typical of their family like some super movable and kinetic mouths (take a look at the slingjaw wrasse) and are hermaphroditic.The name wrasse originates to the Cornish word of “wragh” which means old women while the genus of the hogfish, Lachnolaimus is of Greek origin with Lachne translating to “more covered with hair than others” and Laimos meaning “throat.” The common name hogfish is a result of their pronounced snout and rooting behavior they display while searching for prey in the sand.

Hogfish can be spotted in the Western Atlantic from North Carolina, Bermuda to all the way down to Brazil. These fish inhabit depths of up to 200 ft however are more commonly found in 100 ft or less where they can use corals such as sea fans as cover. While juveniles, hogfish often are found in patchy reef or seagrass beds and later move to the more predominate reef or ledge structure where they tend to stay as they are closely linked to an area/territory. During the day hogfish can be spotted on the reef or the surrounding sand where they forage in the sediment for mollusks like clams, crustaceans like crabs and shrimp and even echinoderms like sea urchins. This species has a set of crushing plates located in their throat called pharyngeal jaws that help break down the shells of their prey making them easier to digest.

Hogfish are protogynous hermaphrodites meaning they are all born female and later transition to males later in life due to social cues in their local population. These fish that tend to stick to their spots spawn in groups where one male can have a harem of 5-15 females. When the male is removed from the population the largest female begins their transition to having male gonads and develop the typical male physical characteristics of a more dramatic sloping snout as well as darker pigmentation around the face almost resembling a mask. It is believed this process of gonad transition can take up to 2 months while the external physical characteristics continue to become more pronounced over time. Sex change from female to male in a typical population occurs at around 3 years of age and 14 inches however if there are no cues to transition there have been documented females as old as 12 years of age and around 25 inches fork length with the oldest hogfish found to be a male at 23 years of age; conversely in populations with heavy harvesting pressure hogfish have been known to transition at a much smaller size. In a 2001 study of 2169 hogfish harvested from the Eastern Gulf of Mexico they found that 50 percent of females matured at about ~7 inches fork length and around ~15 inches for males.

Hogs spawn in the winter/spring season where the males perform interesting behaviors of quivering and raising fins before rushing a few feet off the bottom with the female while expelling their eggs and sperm to be externally fertilized. A single male can spawn multiple times in a day with members of his harem while a female hogfish can spawn multiple times per season as their eggs mature in batches from 1,700 (~10 inch female) to 64,600 eggs (~24 inch female). These floating eggs hatch within 24 hours and are in the larval form for 26 +/- 3 days until they settle out of the water column as juveniles.

When considering seafood sustainability, hogfish harvested in the United States with hand implements are listed as a best choice by the Monterey Bay Seafood Watch. The IUCN has listed the species population as declining which is echoed by the yearly number of commercial landings in Florida so it’s important to take proper care when handling and releasing this fish if caught on hook and line or follow most current fisheries regulations via spearfishing. This species does not handle barotrauma well (injuries caused by changes in pressure as they ascend in the water column) most likely because of their compressed body not allowing trapped gasses to expand as nicely as bigger bodied cylindrical fish as grouper as well as their pharyngeal jaws stopping expansion from moving out the throat so venting or descending gear should be considered if your hogfish is displaying symptoms or having difficulty heading back down post release.

Some food for thought as a fellow hogfish harvester, if harvesting hogfish during their spawning season and removing a male from the population in areas where they may be limited, the time it takes for the female to transition may take longer than the rest of the season meaning that group may not spawn to its fullest potential.

For Current Florida Hogfish Harvesting Regulations Check Out This Page

To read more about sustainability or hogfish stock information check out these links: