In Florida, the most valuable sector of aquaculture is providing ornamental fish, plants and invertebrates for the aquarium industry. About 90 percent of freshwater ornamental fish are produced in captivity however only a few marine species are currently being cultured. Many marine species hatch at a considerably smaller size compared to their freshwater counterparts which results in increased challenges with larval husbandry and nutrition. 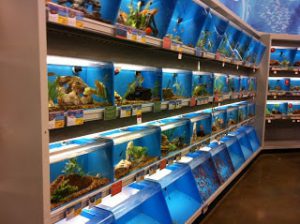 Researchers at the University of Florida Tropical Aquaculture Lab work closely with Florida fish farmers to develop methods that increase yields and enhance the quality of aquacultured products produced. The lab also conducts research to make Florida farmers competitive with imports and work with never-before-cultured species to identify bottlenecks in production and figure out solutions for industry. 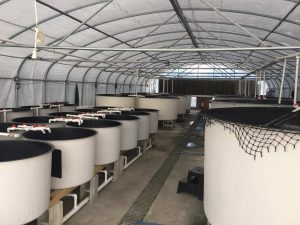 As a graduate student I worked on examining the effectiveness of a novel spawning aid on fish that do not regularly reproduce in captivity. In a captive setting, many fish species do not readily spawn and could be a result of not encountering the same environmental or social cues they would receive in the wild. Spawning can sometimes be stimulated through changing light duration, temperature, water parameters or using drugs to bypass the hormonal cascade needed to mature eggs and sperm. Through our work we found a potential alternative drug that worked similarly to a spawning aid currently on the market. This could be great news for the production of fish that do not respond well to already available spawning aids and could expand the number of species capable of being produced in captivity!

There are many positives of purchasing ornamental fish produced from aquaculture compared to wild caught options. By purchasing aquacultured fish the consumer reduces impacts on wild populations, the environment and the number of fish lost in the process from capture to market. As a result being produced in controlled setting and shorter time in transport, captive fish can be more hardy, accept prepared foods more readily and be less likely to carry parasites/pathogens found in the wild.

Check out this video of us strip spawning upside-down catfish, one of the species used in our study.