Skip Navigation or Skip to Content
Home » UF/IFAS Tropical Research and Education Center » A Botanist’s Insight To Hemp: What We Call Plants And Products

A Botanist’s Insight to Hemp: What We Call Plants and Products

This insights article is part of the blog series Perspectives from the Hemp Industry.

Cannabis sativa – One Plant, Many Crops

Despite its cultivation as a source of food, fiber and medicine, and its global status as the most frequently used illicit drug, plants in the genus Cannabis currently experience an inconclusive taxonomic organization and evolutionary history. Because of the challenges in determining geographical origin of modern plants and the possibility for reproduction across the genus, all plants in the genus Cannabis are most accurately Cannabis sativa (McPartland and Guy, 2017). What is botanically indistinguishable as Cannabis has many distinctions as a crop.

Hemp, as a collection of Cannabis crops, has typically been grown for seed and fiber production and has been incorporated into the industrial manufacture of several derived products, including biodegradable plastics, biofuel, clothing, textiles, insulation, paper, food, and food for animal consumption. Hemp has traditionally contained low amounts of illicit Δ-9 tetrahydrocannabinol (THC, now legally <0.3%), but more recently has been hybridized as a source of cannabidiol (CBD).

Cannabis plants which contain higher amounts of the intoxicating psychoactive cannabinoid THC (legally >0.3%) are used for medical purposes and as a recreational drug, called marijuana. The burgeoning medical industry currently provides both marijuana for therapeutic THC and CBD, and hemp for CBD, though both cannabinoids can be present in marijuana and hemp. 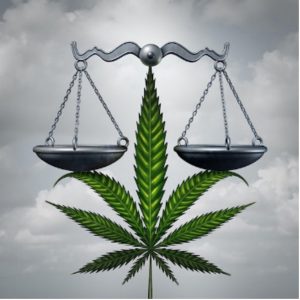 Cannabis dispensaries and product manufacturers still mistakenly label their products based on a perceived distinction between different subspecies of Cannabis sativa plants: indica and sativa. The historical basis to the evolution of these subspecies is that Cannabis sativa sativa developed in northern latitudes, while Cannabis sativa indica came from equatorial regions (Clarke and Merlin, 2016). Yet, recent genomic analyses of cannabis plants reveal that modern plants should be regarded as hybrids of the two, with only some remaining genetic and chemical distinction in terms of their morphology and chemical profiles (Sawler et al. 2015). Many notable cultivars, strains, or clones can express distinct and often robust profiles of cannabinoids, terpenes, and flavinoids. One terpene of particular interest is myrcene, which is recognized for hypnotic properties.

As the chemical composition of a Cannabis plant has been determined to be most important to distinguish between plant types and crops, the United States Pharmacopeia has evaluated specifications necessary to define key cannabis quality attributes (Sarma et al., 2020). Three main chemotypes have been identified as useful for labeling based on the following cannabinoid profiles: (1) THC-dominant chemotypes; (2) intermediate chemotypes with both, and often balanced, THC and CBD; and (3) CBD-dominant chemotypes. Cannabis plants in each of these three groups may be further subcategorized based on the content of other cannabinoids and/or terpene profiles.

A 2017 federally commissioned report from the National Academies of Sciences, Engineering and Medicine (NASEM, 2017) recognized several conditions that have substantial and/or conclusive evidence-based data to support Cannabis’ efficacy. Their statements relied on data accrued starting in 2000; when the average dry-weight percentage of THC available for research was <5%. More so, archeological evidence suggests that a balanced cannabinoid profile had co-evolved after 5,000 years of human cultivated use. Extreme cannabinoid profiles accelerated after 1970’s Controlled Substances Act prohibition of Cannabis and later in efforts for modern medical and recreational markets. 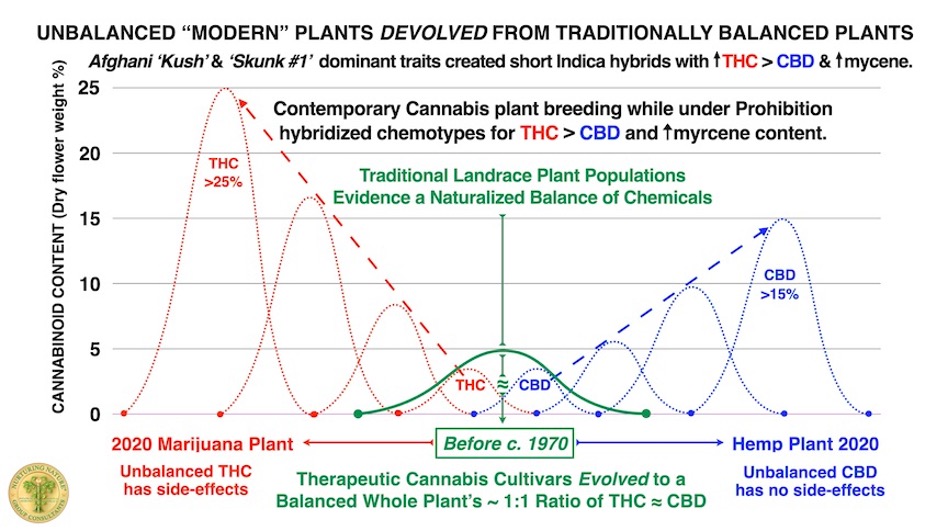 While industry and marijuana advocates enthusiastically champion the plant’s safety based on the NASEM report’s research based on THC <5%, the contemporary plants sold and consumed in 2022 can exceed 20% THC. Indeed, the NASEM report’s findings were able to confirm marijuana’s efficacy for a few indications, but the conclusions were based on evaluating a lower potency marijuana that was available for research between 2000 and 2016. Because currently used stronger Cannabis hybrids have yet to be objectively studied, we know very little about the safety and efficacy of the potent “modern” cultivars and derived concentrates.

What we know is that Cannabis sativa remains one plant with many crops requiring chemical analysis to distinguish the types for appropriate and legal consumer use.

National Academies of Sciences, Engineering, and Medicine. 2017. The Health Effects of Cannabis and Cannabinoids: The Current State of Evidence and Recommendations for Research. Washington, DC: The National Academies Press. https://doi.org/10.17226/24625.

Zack is Asst Prof of Agroecology at the Tropical Research and Education Center; Contact him at: brymz (at) ufl (dot) edu, 786-217-9238