How hurricanes form! (a child-friendly version)

Hurricanes need warm water, moist air, an area of low pressure. Storms that become hurricanes start in the ocean, near the equator, where the water is at least 80 degrees Fahrenheit. The warm ocean water evaporates into the warm air, and rises into the sky!

Evaporation is the process where liquids change to a gas. For example, if you leave a cup of water out in the sun for a few hours, a bit of that water will be gone next time you check on it! That is because the molecules of the water are heated by the sun, which causes 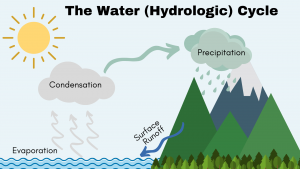 them to change from a liquid form to a gas form. The gas form of water is called water vapor.

Evaporation is a normal part of the Earth’s water, or hydrologic, cycle. Another important part of the water cycle is condensation. Condensation occurs when water vapor, a gas, turns into liquid water again. This is how clouds form!

Evaporation and condensation happen on a very large scale when a hurricane forms. The warm ocean water evaporates, and rises into the sky, creating big clouds.

As the warm air evaporates, a low-pressure system is created near the surface of the ocean. A low pressure system happens because there are fewer molecules near the surface of the ocean, allowing the molecules that are still there to have more room and spread out. The cooler air above has a lot of molecules who also want some room to spread out! So that cooler air swoops down to the low-pressure area and becomes warm air.

The process continues, the warm air evaporates and rises, and the cooler air keeps coming down towards the ocean’s surface. This happens over and over again until giant, cumulonimbus clouds are created! Add in tropical winds and the rotation of the Earth, and a tropical storm starts to form. Once the wind system around the storm reaches at least 74 miles per hour, that storm officially becomes a hurricane!

Make your own Hurricane in a Bowl with these instructions!

Learn more details about how hurricanes form in our LIFE Science Short: