What’s happening with the recycling in Sarasota County?

January has been a big month for recycling in Sarasota County, primarily with the switch to a single-stream collection system across unincorporated areas of the county (that is, not in city limits).

Single-stream recycling is a method of collecting recyclable materials using just one container, and residents received a new single-stream recycling cart that replaces the blue and red dual-stream bins. With the new cart, paper and plastic recyclables no longer need to be segregated into individual bins, but are simply comingled in the cart for pickup.

There are several reasons for the change.

The second reason is simple volume. Studies by the University of Wisconsin have shown that 5-10 times more recyclable material is collected using single-stream methods. In large population areas, like Sarasota County, this translates into vastly higher recycling amounts.

And, finally, haulers note that single-stream collection is more cost-effective. No longer do drivers need to get out of their trucks to dump bins; instead, a robotic arm grabs and dumps the carts. This is faster (and safer) for the hauling companies.

Still, even with the added contamination, the volume of material collected overall remains greater using single-stream. 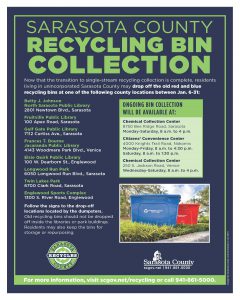 So, locally, what is happening to all of the old red and blue bins? Residents have a few options on what to do with these now-relics.

Ultimately, Waste Management will recycle many of the collected bins. The bins are made from #2 plastics, which is the most desired material for use in recycled products.

Other bins will be used in a number of creative projects around the county. Schools plan to use some in classrooms to collect recyclables, helping to increase participation rates. And, UF/IFAS Extension Sarasota County will use some bins for planters and worm composting bins. We encourage you to be creative.

Learn more about recycling at one of our “Recycle Right!” classes.