The necessity of nature

Inspired by Richard Louv’s book “Last Child in the Woods,” Take A Child Outside Week (Sept. 24-30) was founded to help connect children with nature and to combat what Louv has referred to as “nature-deficit disorder.”

According to the National Wildlife Federation, children now spend HALF as much time outside as they did 20 years ago. Louv links this decreased time in nature to increasing trends in childhood obesity, attention disorders, and depression. Numerous research studies have documented the positive impact of nature on children and adults. This response appears to be cross-cultural and independent of socioeconomic status or race, although the opportunity for exposure to nature is not always equal. 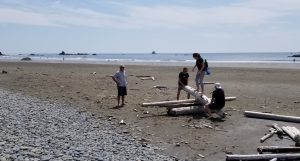 Multiple studies show a direct link between nature and improvements in both mental and physical health. Lower pulse rate and blood pressure, decreased depression, reduced stress response, and less aggression; along with improved immune function and increased attention are all benefits to spending time in our natural world. Other benefits of spending time outdoors include increased physical activity in a generation that is often indoors or on screens.

Gray et. al. (2015) have shown that time outdoors not only leads to increased physical activity but also to better cardiovascular health. Cardiovascular activity has been shown to be the component of fitness most associated with academic success (Santana et. al., 2017). Increased activity as a child may lead to continued activity as an adult; important, as heart disease is consistently the number one cause of death in American adults.

Benefits of Nature Extend Beyond the Moment

Time in nature has been shown to decrease mental fatigue and improve concentration and focus in both youth and adults. When children spent one day a week learning in a forest setting, levels of salivary cortisol (a measure of a hormone released in response to stress) dropped compared to children who learned the same material in a classroom (Dettweiler et. al., 2017).

The beneficial effects of learning in nature expand beyond the single experience. Not only did cortisol levels remain lower over time for those exposed to nature, but other far-reaching benefits occurred. Multiple studies have shown links between time in nature and improved engagement in classroom settings, improved interest in academics overall, and fewer school absences (Kuo, 2018; Benfield, 2015; Blair, 2009; Becker, 2017; MacNaughton, 2017). In a study of 3,000 students, those who participated in school garden programs (like those in Sarasota County), demonstrated increased knowledge gains as compared to those who learned the material in a classroom (Wells, 2015). 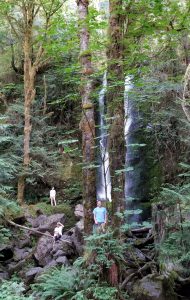 Children and adults have shown increased self-discipline when in nature, or even when able to view natural settings. Parents reported less hyperactivity (Flouri et. al., 2014).

A Prescription for Vitamin N

Some American cities have partnered with physicians and pediatricians to write nature prescriptions to get their patients out to local parks and natural areas.

The city of San Francisco has worked with its Department of Public Health to offer health-oriented programs throughout the city parks. Dr. Robert Zarr, pediatrician and founder of Park Rx America, mapped and rated all the green spaces in Washington, D.C., in a way that can be linked directly to a prescription and the patient’s medical records.

Track Rx: Hiking for Health is another program to help kids and families learn how spending time in nature improves their overall health. Physicians can write a prescription or provide the Track brochure to their families, and families can receive a prize upon completion while also receiving all the aforementioned health benefits of spending time in nature (and together).

The National Park Service has an initiative to get every child in a park, and they provide every fourth grade student with a free pass to visit national parks and wildlife refuges during the entire school year. Get your fourth grader their pass HERE.

Need other ideas? Look below or read Richard Louv’s “Vitamin N“, which includes 500 nature based activities. 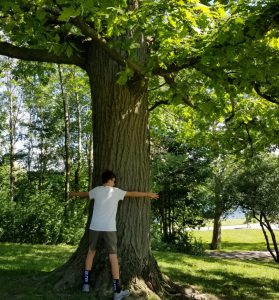 Time spent in nature is intrinsically interwoven not only with developing environmental stewardship and a conservation ethic, but also with individual and public health, and sustainability on all levels: economic, environmental, and social.

When we think about instilling a sense of value for nature and conservation in our children, it is not just about teaching them the facts. What really creates a future environmental steward is an emotional connection, a positive experience with nature, as shown by Otto and Pensini (2017). So go have fun outside and grow your future leader, learner, and successful adult!

Take Your Child Outside this week…. and every week that you can!

Dr. Katherine Clements is the Ecology and Natural Resources Educator for UF/IFAS Extension and Sustainability Sarasota County. Previously a practicing naturopathic physician with a background in environmental studies, she believes the health of the environment is intricately linked with our own health and well-being. ...