Throughout history, women have been instrumental in advancing science, in key discoveries and insightful developments. Some of my favorite contemporary scientists are women, including Dr. Sylvia Earle, Dr. Jane Goodall, and Dr. Eugenie “Genie” Clark, each of whom I had the honor to meet.

However, according to a United Nations report, “many of the world’s biggest problems may be going unsolved because many women and girls are being discouraged from the sciences. There are several reasons for the gender gap in the sciences, from the prioritization of boys’ education, to gender biases and stereotypes, and the global divide, which disproportionately affects women and girls.” And, less than 30 percent of researchers worldwide are women, and only around 30 percent of all females select STEM-related fields in higher education, according to UN data. 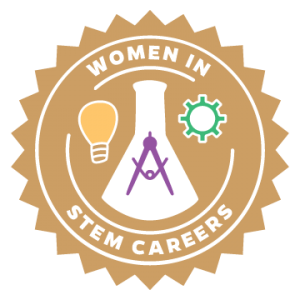 In my “Women in STEM Careers” blogs series, launching with this post, I hope to help make that change. I will highlight the work of some very inspiring women scientists that I know. The goal is to not just share stories of some amazing careers, but hopefully inspire other women to enroll or continue in higher-education STEM careers.

Please tell us who you are and what do you?

I’m Dr. Emily Hall and I’m a staff scientist and program manager at Mote Marine Laboratory. I manage both the Ocean Acidification Program and the Chemical and Physical Ecology Program. I have been at Mote for 15 years! Most of my work is related to chemical ecology: understanding the changing chemistry of our marine, coastal, and estuarine environments, and how that might affect different organisms and environments.

Why did you decide to go into this field?

I grew up always outside, on the water, and I knew from a young age that I wanted to do something in a science field, but I wasn’t sure what…until I took an environmental science class in college. We were outside for most of the class and really got to see and understand some of the changes that we as humans were causing. I wanted to know why, and to figure out if there was a way to fix things.

What really excites you about your work/career?

One of the main things is that I get to be outside in nature, trying to understand it, trying to figure out what we can do to change some of the damages we’ve caused. The best though, is being underwater. SCUBA diving opens up a whole new world that not many people get to see. Here’s a quote from Sylvia Earl that I really connect to: “Every time I slip into the ocean, it’s like going home. With every drop of water you drink, every breath you take, you’re connected to the sea. No matter where on Earth you live.”

Do you have a female scientist that you admire? If yes, who and why?

Absolutely! Dr. Genie Clark is one of the strong female scientists (along with Dr. Sylvia Earle) who led the way in the field of marine research for women. I grew up in Sarasota and even did an internship at Mote back in the ‘90s. When I started working at Mote, Genie was always around and always willing to share her stories…she was a blast to listen to! Back in 2012, I started the Ocean Acidification Program at Mote and one of our big projects included traveling to Israel and Jordan to do work on coral reefs in the Red Sea. This was so incredible because it was like following in Genie’s footsteps. I went with two other incredible female scientists, got to do amazing research there, and connect with other scientists who Genie had worked with. She was such an inspiration!!

What would be your advice to younger women thinking about enrolling in a STEM career?

Go for it! Don’t let anything slow you down, but know that there will be walls. You’ll apply for 25 grants, and only get awarded one of them, but that one…will make a difference! You have to learn to keep moving forward and keep trying!