There are 46 species of snakes in Florida and only 6 of them are venomous.  These creatures play an important role in our Florida ecosystems. One described even eats venomous snakes and is a federally protected threatened species. Read on to learn about some of Florida’s most commonly confused snakes.

Many snakes have similar characteristics, making it difficult to differentiate between them. However, it is important to be able to accurately identify snakes for your own safety due to the fact that many venomous and non-venomous snakes look alike. Another reason accurate identification is important is that some management decisions depend on the presence or absence of certain species. This is especially true for species that are considered threatened or endangered. 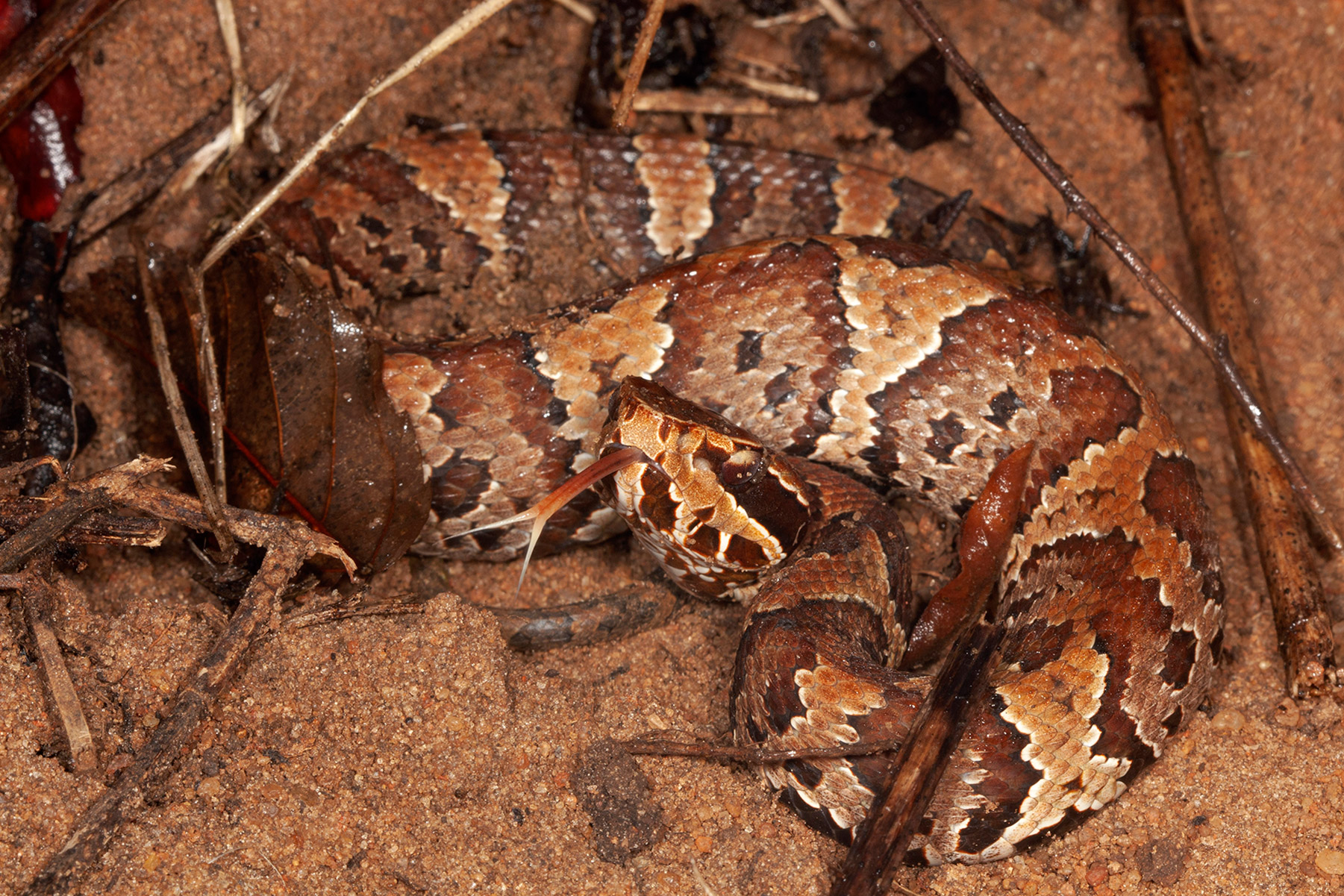 Water moccasins (Agkistrodon piscivorus) are venomous snakes with thick bodies. They are dark in color with various banding on their bodies. Water moccasins have a dark, broad, band from their eyes to the corner of their mouth. Their heads are thick and blocky with vertical, or “slit” pupils, and a distinct neck. Although they are venomous, water moccasins will not attack humans unless they are threatened. They sometimes display their white mouths to scare off threats, earning them the common name of “cottonmouth”.

Cottonmouths can be found near the water in:

Southern water snakes (Nerodia fasciata) are harmless snakes with slender bodies. They are also dark in color with various banding on their bodies. Their heads are dark brown with round pupils and have vertical lines along their lower jaw. As their name suggests, water snakes can also be found living in nearly all freshwater habitats such as: 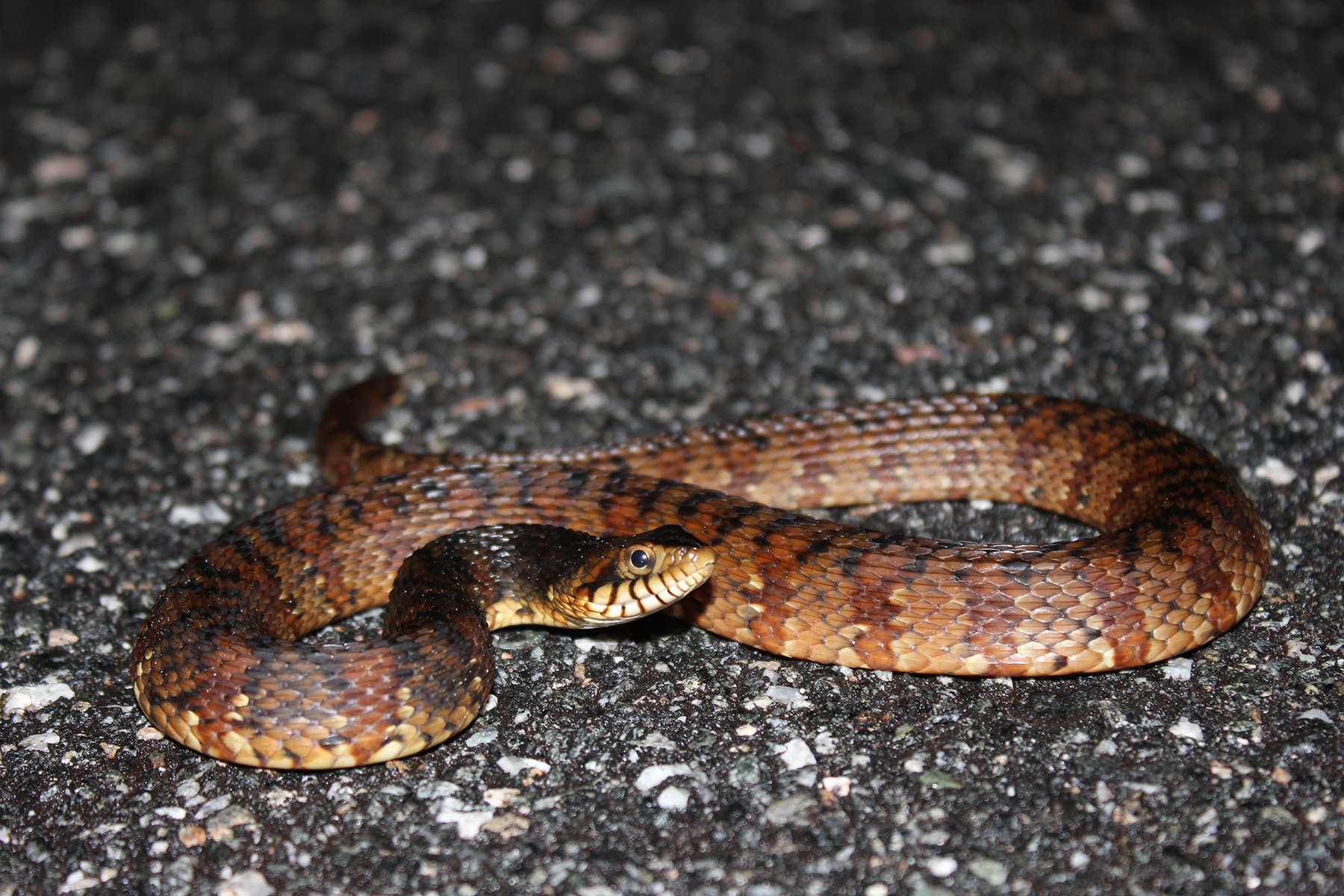 Because both snakes are dark in color with various banding on their bodies, it can be difficult to distinguish between water moccasins and southern water snakes. Both snakes can be found in and around water feeding on fish and other small animals. The best way to tell these two snake species apart is by observing their heads and looking for the water moccasin’s distinct dark band. Another way to distinguish the two snakes is by their bodies. Water moccasins have very thick bodies, while southern water snakes have more slender bodies. 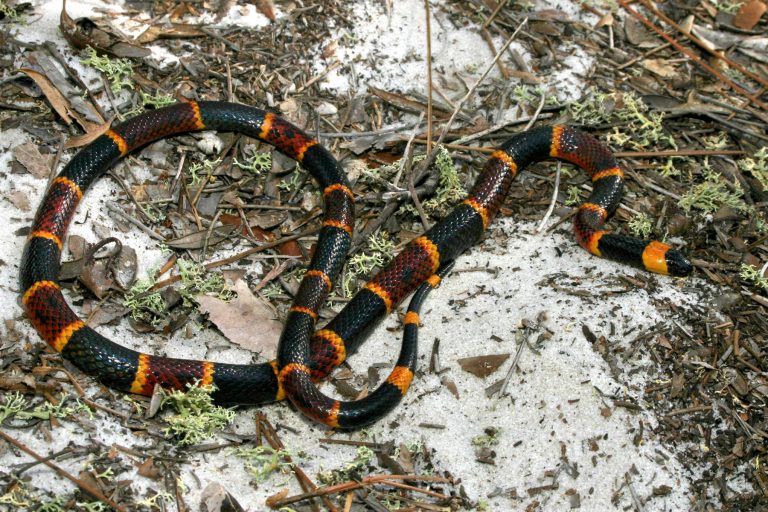 A coral snake has a solid black snout but a scarlet kingsnakes has a red snout.

*We do not recommend using rhymes to remember harmless snakes from venomous snakes. The order of the snakes’ vibrantly colored band patterns can be easily confused.* 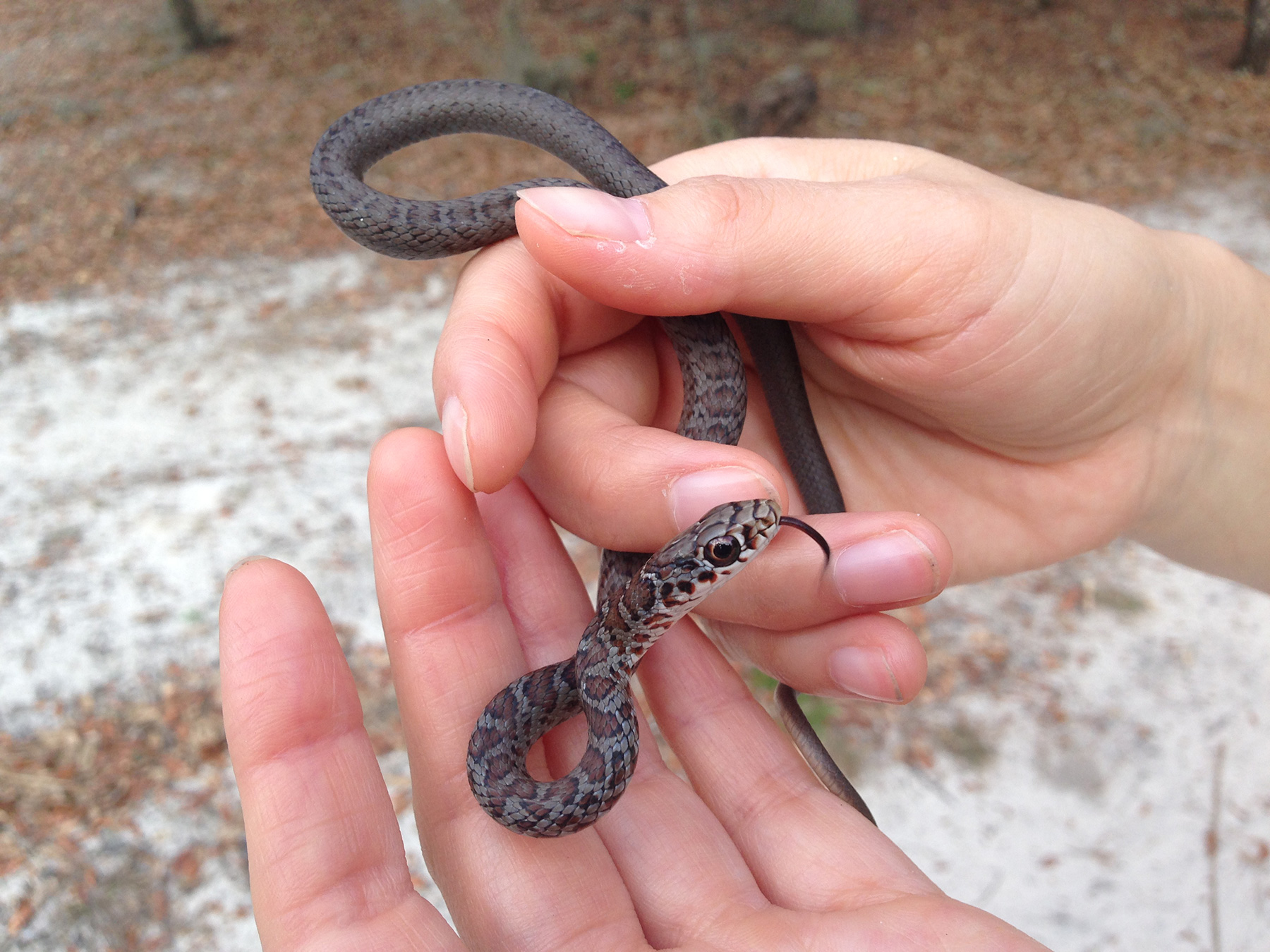 Like the juvenile southern black racer, dusky pygmy rattlesnakes (Sistrurus miliarius barbouri) also have patterned bodies. Pygmy rattlers are venomous snakes with thick bodies and rough, dull scales. They also have vertical slit eye pupils. Pygmy rattlers often live near water sources such as creeks, marshes, and swamps. However, they are found in a variety of other habitats such as:

Both the dusky pygmy rattlesnake and juvenile southern black racer are common in urban areas. These two snake species look very similar and are best observed from a distance due to the potential danger of the snake in question being a pygmy rattlesnake. 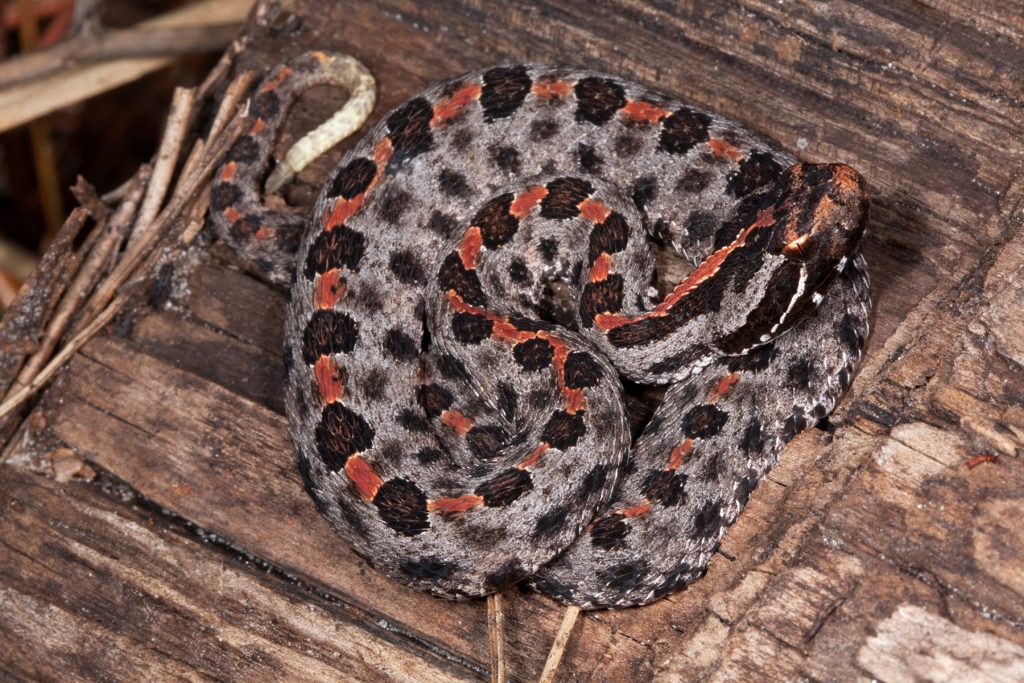 The best way to tell these species apart is to look at the head. The size of the eye on a juvenile eastern racer is significantly larger than the smaller eye size of the dusky pygmy rattlesnake. It should also be noted that the pupil shape of the dusky pygmy rattlesnake is difficult to see without use of binoculars due to the distinctive dark eye-band that runs along the side of the head. You will note this dark eye-band is absent on the juvenile eastern racer. 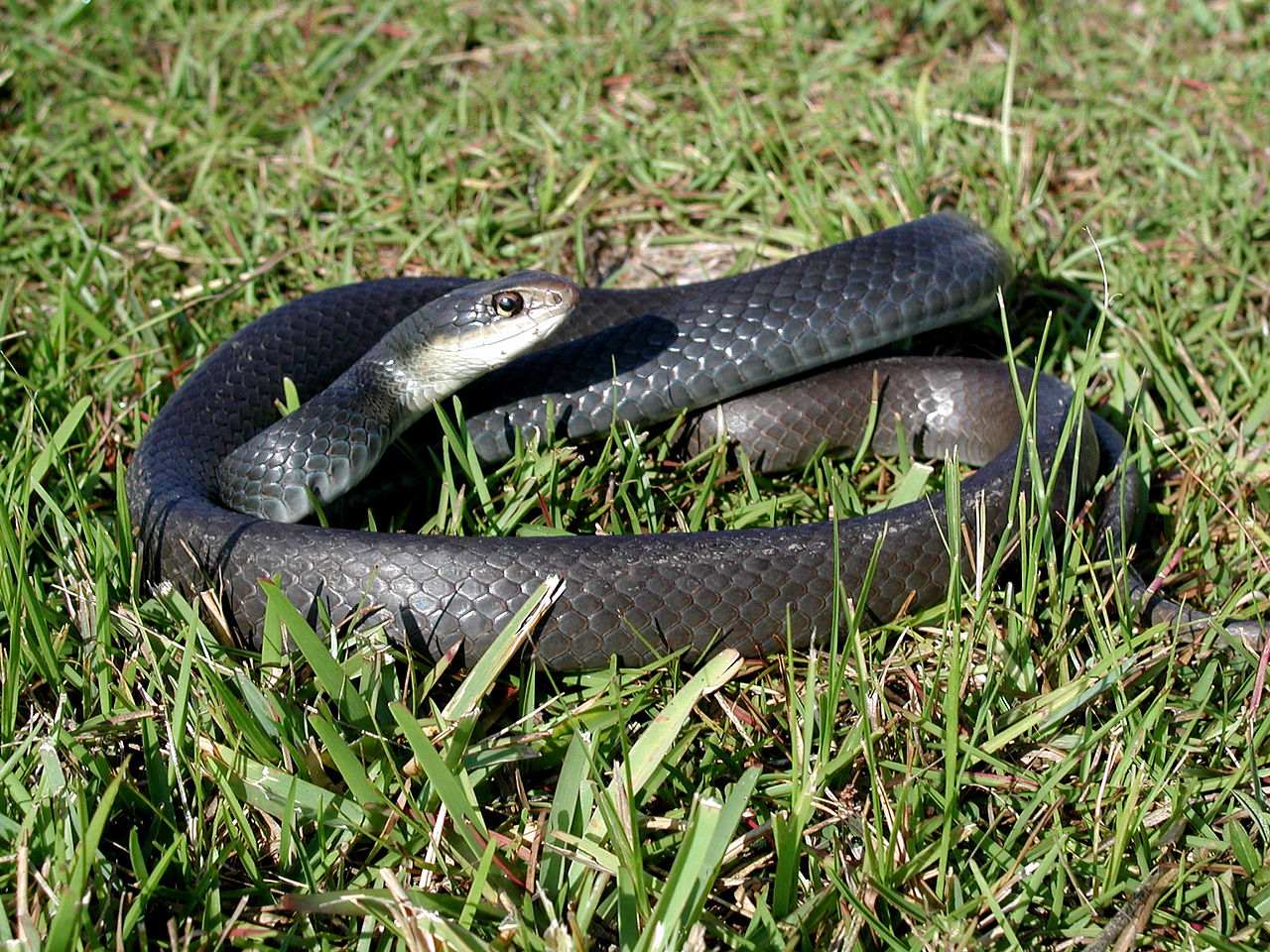 They are commonly found in: 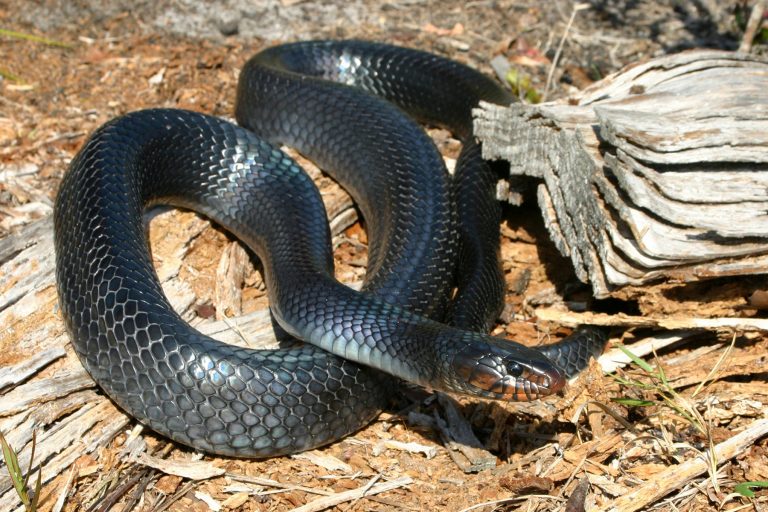 Although these snakes are often mistaken for one another, one way to tell the two apart is that southern black racers have distinctive white chins, while Eastern indigo snakes usually have reddish or orange-brown chins. Additionally, black racers are slender and fast moving. Eastern indigos are stockier and slower-moving.

Although these snakes are often mistaken for one another, it should be noted that Eastern indigo snakes are very rarely seen as they are classified as a Threatened species. Eastern racers on the other hand are one of the most commonly encountered black snakes.

Fun fact: Eastern indigo snakes will eat other snakes and most importantly, they will eat venomous species! They are North America’s largest native snake, growing up to eight feet long!

If you would like to watch a webinar where I describe several varieties of snakes in Central Florida and talk about basic do’s and don’ts for snake emergencies, you can watch that webinar on youtube, here: https://youtu.be/cWQC1FKE1io