March 22nd is World Water Day, a day to remember the importance of water in our lives, its responsible use, and the work still to be done to provide safe water to everyone. The United Nations decreed it an annual observance in 1992 to be first celebrated the following year. The focus for this year is groundwater, which is an important source for drinking water around the world, including Florida.

Although 71% of the Earth’s surface is water, 96.5% of our planet’s water is in the oceans, with only 2.5% fresh. Sixty-eight percent of freshwater is bound up in ice and glaciers, making it unusable to humans. Of the remaining, 30% is groundwater while slightly over 1% is surface or other freshwater. Not all groundwater is fresh – of the 1.7% of total water, only 45% is fresh. In large part to accessibility, rivers provide the drinking water for most of the world’s population. 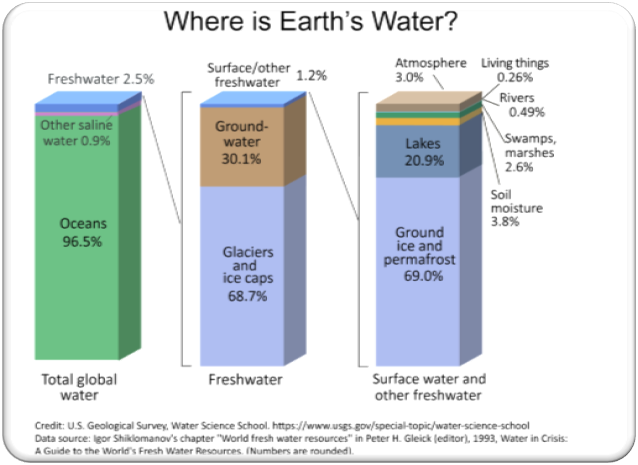 Florida is known for its water – 18.5% of our land surface is covered in it! Combined with our average annual precipitation of 55 inches, more than 8,000 miles of coastline, 1,700 streams and rivers, and 11 million acres of wetlands, perhaps it might be more aptly names the water state. Karst topography is responsible for many of our 7,800 lakes. As the limestone bedrock dissolves with percolating water, sink holes form that then fill with rain or groundwater. Florida is also the spring capital of the world with 700 springs, 33 of which are first magnitude, meaning they have an average discharge of more than 64.6 million gallons per day.

According to the most recent United State Geological Survey reflecting usage from 2015, Florida withdrew more than 15 billion gallons of water per day. Roughly one third was freshwater with the other two thirds saline. Groundwater provides drinking water for 92% of the population, with 62% of withdraws coming from the Floridan Aquifer and the remaining from the Biscayne and surficial aquifers. The Floridan is one of the most productive aquifer systems in the world and covers about 100,000 square miles of the Southeast.

In Polk County specifically, more than 200 million gallons of groundwater are used each with only a meager 16 million gallons per day of surface water. Agricultural and public supply are the primary uses here and the demand for each is approximately equal. Despite our growing population, gross public supply and domestic per capita use have declined since 2000. This is due in part to increased efficiency of household fixtures and appliances and public education. The trend must continue for the foreseeable future since our anticipated growth is expected to leave the state with a shortfall of 337 million gallons a day by 2040.

So how can you be a better steward to our water resources? First, irrigate your lawn responsibly. Outdoor water use accounts for approximately half of household water use. This part of the state is on permanent mandatory water restrictions allowing up to two days of irrigation per week even addresses on Thursday and Sunday, odds Wednesday and Saturday. Always water before 10 AM or after 4 PM to minimize evaporation. If you live in an older home, make sure you have a modern toilet. Those manufactured thirty years ago used at least two more gallons per flush than those produced today and many utilities are offering rebates to help defray the costs. Changing shower heads and aerators to low-flow models can also result in significant savings. Finally, if you think you have a leak due to high water bills, sounds of running water, or unexpected dampness, please investigate. Repairs become more expensive the longer you wait.

Beth is the water conservation specialist for UF/IFAS Polk Extension. She educates the public on water saving strategies and programs available to help in these endeavors.