Nothing says Florida like a palm tree, and they are usually low-maintenance landscape plants. In the rare case that a palm does get a disease, say a fond farewell, as little can be done to save it. However, nutrient deficiencies can often mimic diseases, so good fertilization will fix many odd-looking problems. The thing to remember is that applying fertilizer does not heal the existing leaves, so you won’t see improvement until new fronds emerge – six months after fertilizing. 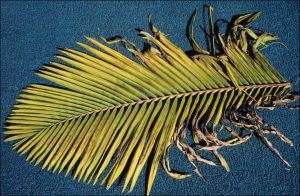 The “frizzle” on this poor frond may look like a disease, but it is actually caused by a manganese deficiency. For more odd-looking nutrient deficiencies, see http://edis.ifas.ufl.edu/ep273. Credit: T. K. Broschat, UF/IFAS

One common way palms tell us they have a problem is yellow fronds. Healthy palm fronds will yellow and die within one day. Yellowed fronds that have been there for weeks generally indicate a nutrient deficiency – the palm is pulling nutrients from the old fronds to keep itself alive. You don’t need to identify the specific deficiency to fix it; just use a complete palm fertilizer as described below. Avoid using a single nutrient fertilizer such as manganese or iron, as it will often cause a nutrient imbalance. And remember, you won’t see results for at least six months! 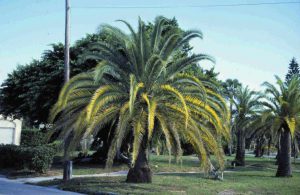 Palm roots extend 50 feet from the tree, which means to fertilize your palm, you may have to fertilize your whole yard. Palms need the same nutrients as grass and ornamentals plus some extras, so you can use a good palm fertilizer on everything. Finding a good palm fertilizer, however, can be tricky. The numbers on the bag don’t indicate whether the nutrients are in a form that the plant can use. One reliable brand is Lesco, available from SiteOne Landscaping (www.siteone.com). Or, you can look for 8-2-12 or 8-0-12 and all of these ingredients:

Avoid fertilizers containing “oxide” or “sucrate”. Also, wastewater fertilizers such as Milorganite bind up some of the nutrients that palms require, so don’t use them within 50 feet of your palms.

The roots that palms use to take up nutrients are in the top six inches of soil. The practice of injecting fertilizer into the ground just puts it into the groundwater, wasting the fertilizer and causing pollution – a double whammy! Instead, sprinkle a granular fertilizer evenly over the area, water in, and you’re done. Apply in February, May, and November. For your August fertilization, use 0-0-16-6Mg instead to comply with Central Florida fertilization restrictions.

If you are already using a turf fertilizer in the yard, you can just supplement it with 0-0-16-6Mg to make your palm happy. Broadcast the supplement in a 50 foot radius around the palm at the rate of 15 lbs per 1000 square feet. For one palm or a small grouping, that is 30 lbs of fertilizer.

If a palm is healthy, its canopy it will almost form a circle. Palms don’t necessarily need pruning. However, some people like a more “lifted” look, so if you must prune, cut only the fronds below the center line (3 and 9 on the clock face). Remember, yellow fronds are providing nutrients to keep the rest of the tree alive, so don’t remove them. Fertilize, and wait for the yellow fronds to die completely before cutting. Palms can be pruned any time of year, and it’s okay to cut off the flower stalks.

One thing that seems to go against common sense is that heavily pruned palms do not survive hurricanes as well as properly pruned or unpruned palms. Removing fronds should mean less wind resistance, right? Wrong – studies have shown that removing the fronds weakens the crown, resulting in more wind damage. So resist the urge to prune to a jaunty topknot. Your palms will thank you! 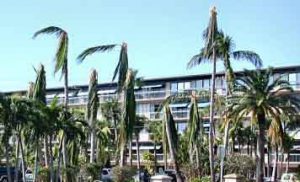 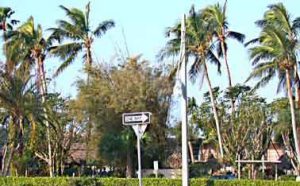 Palms are generally trouble free landscape elements. In Central Florida, choose varieties that can take a cold snap, and they’ll add an easy tropical flair to your yard for years to come.