There are several situations where you may find yourself with a bottle calf. At the earliest stages, you may have witnessed the birth. If the mother survived, let nature take its course. But if you happen to see the mother die from birth or she is unable to stand, there are some steps you need to take swiftly in order to help increase the chance of calf survival.

If the mother died or is unable to stand, make sure the umbilical cord breaks. The calf should start to breathe on its own shortly after this. Remove any mucus from around its nose. If the mother is alive but unable to stand, try moving the calf in front of her to allow her to lick the calf clean. Be aware of the disposition of your cattle. Mothers typically do not allow strange creatures to get near their new calf. Even if crippled, the cow will likely try to catch you. If the cow has died in labor, take a towel, shop rags, or shirt and wipe the calf dry. The rubbing dry will help stimulate the blood flow for the calf. If available, dip the navel cord into an iodine solution.

When calves develop within their mother, they actually have little connection in regards to immunity. So when the calf is born they are very immuno-compromised. This is why it’s very important for the calf to receive a strong dose of antibodies. These antibodies naturally come from the first milk from the mother called colostrum. Colostrum is high in nutrients and antibodies called immunoglobulins. It’s important that the calf receive no less than 2 quarts of colostrum in the first 3 hours of life (ideally in the first 30 minutes), and another 2+ quarts at hours 6-8. After 6 hours of life, the calf’s small intestine will begin to absorb two-thirds the antibodies that it receives, and only 11% after 24 hours. 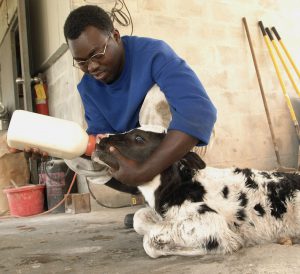 Steve Williams, a student from Jamaica majoring in dairy science in the International Fellows Program at the University of Florida’s College of Agricultural and Life Sciences, feeds a new Holstein calf, Friday- Dec. 14, 2001, at UF’s Dairy Research Unit near Hague, Fla. Williams plans to return to Jamaica in one year to manage a dairy farm there.

If the calf can’t or won’t drink, you may need to use an esophageal feeder. This is a plastic tube that is attached to a bag or bottle containing the colostrum. Use caution if using a feeder tube. The feeder tube is designed to bring milk to the esophagus, not the stomach. Restrain the calf between your legs with a fence behind you. Place the tube on top of the tongue and gently press the tube back until the calf swallows it. Make a mark 12-16” from the end of the tube so you know when to stop. Then allow the milk to flow into the calf’s throat.

For their first two weeks of life, most of their nutrition will come from milk. Colostrum can be given the first four days but after that, milk replacer is usually the simplest and most economical choice. Be sure to use a milk replacer that uses dried skim milk or whey as the source of protein. 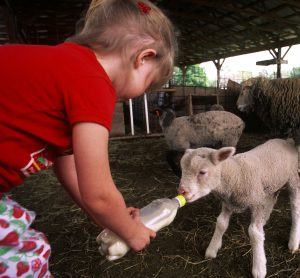 This little girl, while excited to help, is holding the bottle wrong. Be sure children hold bottles the correct way to ensure steady milk flow.

When a calf drinks milk, you may notice that the calf will stretch out its neck and look up. This triggers an amazing reaction within the calf. The esophagus of the calf will actually shunt the milk it drinks into the abomasum, bypassing the other 3 stomach chambers. This is called the esophageal groove. This way, no milk ferments in the rumen and causes the calf sickness. Also, when trying to drink, you may notice the calf will aggressively throw its head up. This is a natural reaction. The calf is trying to stimulate the udder in order to allow milk let down. If the calf isn’t able to receive the milk as fast as it wants, it will do this headbutt. So if allowing smaller or younger children to feed calves, be sure they hold the bottle up and high enough so that the milk flows correctly and allows the calf to extend their neck.

When feeding milk to a calf, use a bottle with a teat like attachment, or a bucket with a similar like attachment. Sometimes for adequate flow the end must be cut a little wider with a pocketknife.

Calf starter feed and water should be given free-choice at four days of age. No more than a coffee cup worth of feed should be given daily. The calf will only nibble the feed for the first two weeks. The calf starter will help aid the development of the rumen. At two to three weeks of age, feed consumption will begin to increase. Once the coffee cup worth of feed is being consumed, add a half pound to the ration daily. Once the calf begins to eat 1.5-2lbs of feed daily for three days, it will be time to begin weaning the calf off milk. This can be done abruptly or gradually over three to seven days.