Eastern Tent Caterpillars and Your Horses 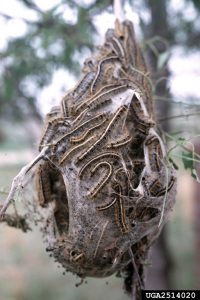 If you take a look around your yard this spring, chances are you will spot bags of caterpillar webs. If you were to peer closer you will see numerous Eastern Tent Caterpillars(ETC) inching around. These insects exist throughout the United States, including Florida. ETC will not kill your trees, but their presence can result in branch/leaf loss. Their tent nests form traditionally in the forks of the trees, however this is not the only location. ETCs especially enjoy Prunus spp. trees like Cherry and Plum, but at the end of the day can inhabit any tree. Although these insects are a nuisance to your horticulture, a true danger exists when these caterpillars combine with the horse industry…including the dangerous Mare Reproductive Loss Syndrome (MRLS).

The theory of Mare Reproductive Loss Syndrome first appeared in 2011 when Kentucky gained the spotlight with roughly 1/3 of the foal crop (over 3,500 foals) were prematurely born or aborted. This included 3,600 Thoroughbreds and 1,000 Paint and Quarter Horses. The epidemic resulted in ~`$500 million in industry losses. The mares who aborted their foals showed few, if any signs of illness. The proposed rationale for this tremendous loss was linked to the hatching population of the Eastern Tent Caterpillar. Although these caterpillars are not toxic, the danger lies in their body’s hairy setae.

As ETCs hatch from their web tents, they will migrate through fields to find an area to pupate (or initiate the cocoon state). This occurs in February and can continue for 4-6 weeks. Broodmares foraging in pastures unintentionally ingest these caterpillars. As the horse digests the insects, the setae or hairs will break off and lodge into/through the digestive tissues. The setae act as transporters of gut bacteria that then are released into the bloodstream with the setae. Bacteria laden setae invade sensitive areas such as eyes, neural, cardiac, and fetal tissues.

Infections caused by ETCs can also be linked in horses of all genders, ages, and pregnancy status and present as having eye, pericardial (surrounding heart), and neural infections. Eye infections caused by ETC ingestion can result from having ingested as few as 10 setae a day. Other studies have concluded that other “hairy” caterpillars may pose a similar risk, however currently no cases have been linked to other species. The extreme losses seen in Kentucky in 2001 were also contributed to an especially large population of ETCs. 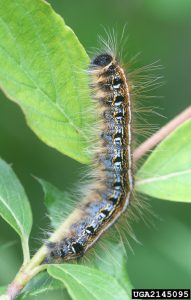 So how can you protect your horse? The easiest step is to identify if ETCs are nesting near your pastures. If not simply monitor your trees, especially in February. If you do notice tents, remove them from your trees as soon as possible and remove horses from nearby pastures. You can apply insecticides to kill off the nests but remember to be cautious of horses interacting with these pesticides. For insecticide suggestions see the UF/IFAS EDIS publication.If the nests are very high and not easily removed, you may want to consider removing the entire tree. For other suggestions contact Nassau County Extension Services at 904-530-6353.

I am one of the 4-H Youth Development Agents here in Nassau County. My focus areas include: Animal Science with specialty in horses, Environmental/Wildlife Science, STEM and Emergency Response.