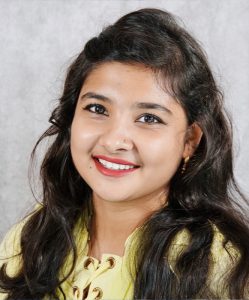 Welcome to FSHN Research Journeys, which follows the research of graduate students in the Food Science and Human Nutrition program at UF. Today’s guest poster is Tamanna Afrin Prami, a first-year doctoral degree student in nutritional sciences. She is studying in the lab of Dr. Mitchell Knutson. Learn about her research into understanding iron overload as well as a possible treatment for its devastating effects on the human body.

In November 2018, BBC Health reported a case with mystifying symptoms. Katherine Hough, 27, suffered for four years with unexplained stomach pains in addition to severe joint pains, hair loss, and fatigue. After careful investigation and blood tests, she was diagnosed with hereditary hemochromatosis, a genetic condition that causes iron overload in the body.

The Dangers of Iron Overload

Studying the NTBI uptake process is essential to understanding how iron overload happens. Some cell types and tissues can take up NTBI via membrane transport proteins. So far, only three mammalian iron transport proteins have been identified: DMT1, ZIP14, and ZIP8. Recently, researchers have recognized that ZIP14 and ZIP8 play an important role in the uptake of NTBI during iron overload conditions.2

All three transport proteins are expressed in tissues throughout the body, but their abundances differ among tissues. For example, ZIP14 is highly abundant in the jejunum, liver, pancreas, and heart while ZIP8 is expressed mainly in the kidney, lung, and placenta. During iron overload, these transport proteins can take up iron in their corresponding organs, resulting in toxicity.

This toxicity may lead to various complications including endocrine disorder, acute and chronic kidney diseases, liver cirrhosis, and heart failure. The symptoms that arise from these disorders often include fatigue, lethargy, abnormal heart rhythm, and arthritis. Although iron chelation therapy decreases iron loading, it does not completely prevent it. As a result, patients ultimately develop iron overload and iron-related diseases. Those suffering from these diseases need alternative or additional treatments.

I was born and raised in Bangladesh, a developing country that faces many global health issues including malnutrition and nutrition-related chronic diseases. I became interested in my research project while taking a human nutrition course as an undergraduate student. As a part of my coursework, I collected surveillance data on patients with anemia in Bangladesh.

After completing my undergraduate degree, I searched for nutritional sciences graduate programs. On the UF FSHN Department website, I found that Dr. Mitchell Knutson’s lab focuses on identifying and characterizing iron transport proteins at the molecular, cellular, and physiologic levels. My graduate research project is part of the major aim of the Knutson Laboratory, which is to identify iron transport proteins in various tissues. My graduate research project completely fits my interest in iron metabolism.

Researchers and students in the Knutson Laboratory study the roles of ZIP14 and ZIP8, mainly in the context of iron overload. So far, researchers in our lab have shown that ZIP14 is required for iron uptake into the liver and pancreas during iron overload.3 So, ZIP14 can be a potential therapeutic target in the treatment of iron overload in these organs.

The role of ZIP14 and ZIP8 in the kidney remains unknown. In my research project, I will look specifically at the roles of ZIP14 and ZIP8 in the kidney. My goal is to determine whether ZIP14 and/or ZIP8 are required for iron uptake by the kidney during iron overload. I will use a variety of conditional knockout mouse models to better understand the iron transport system. Lab techniques include western blotting, immunofluorescence, QRT-PCR, and Gamma counting. I will then analyze the data with various statistical tests including the t-test.

My research project is important because the kidney plays an essential role in iron metabolism by reabsorbing iron while filtering urine. Moreover, disturbances in iron balance are recognized as a cause of kidney injury. But we do not yet understand the molecular mechanism of iron handling in the kidney.

A better understanding of iron transport will help us to understand how transporters play a role in kidney disorders such as chronic kidney disease. This research will help to identify therapeutic inhibitors that would increase urinary iron excretion. As a result, we could lessen iron overload-related complications among patients who are suffering from hereditary hemochromatosis like Katherine Hough.

Jessie Erwin is the nutrition communications consultant for the UF/IFAS FSHN department. She is a registered dietitian with three kids and can make a delicious chocolate date cake. Contact Jessie at jerwin@ufl.edu.