Red snapper! This well-known fish is highly prized among fishermen and seafood connoisseurs alike! Often you may hear “red” In front of the word snapper but within the snapper family Lutjanidae, there are over 100 species of fish! In Florida, multiple snapper species happen to be red in color, some of those fish include the vermillion snapper, silk snapper, queen snapper, blackfin snapper and wenchman snapper. There are also a variety of snapper than can be red-ish in appearance so make sure you’re properly identifying your fish before throwing them in the box. Some snapper like the red snapper have seasonal closures and aggregate bag limits can vary between species. Some ID characteristics of red snapper include a deep profile body shape (dorsal/ventrally stretched), red eyes, close together villiform teeth with smaller canines, a pointed anal fin, a non-forked tail and red colored scales with slight white countershading on the bottom. 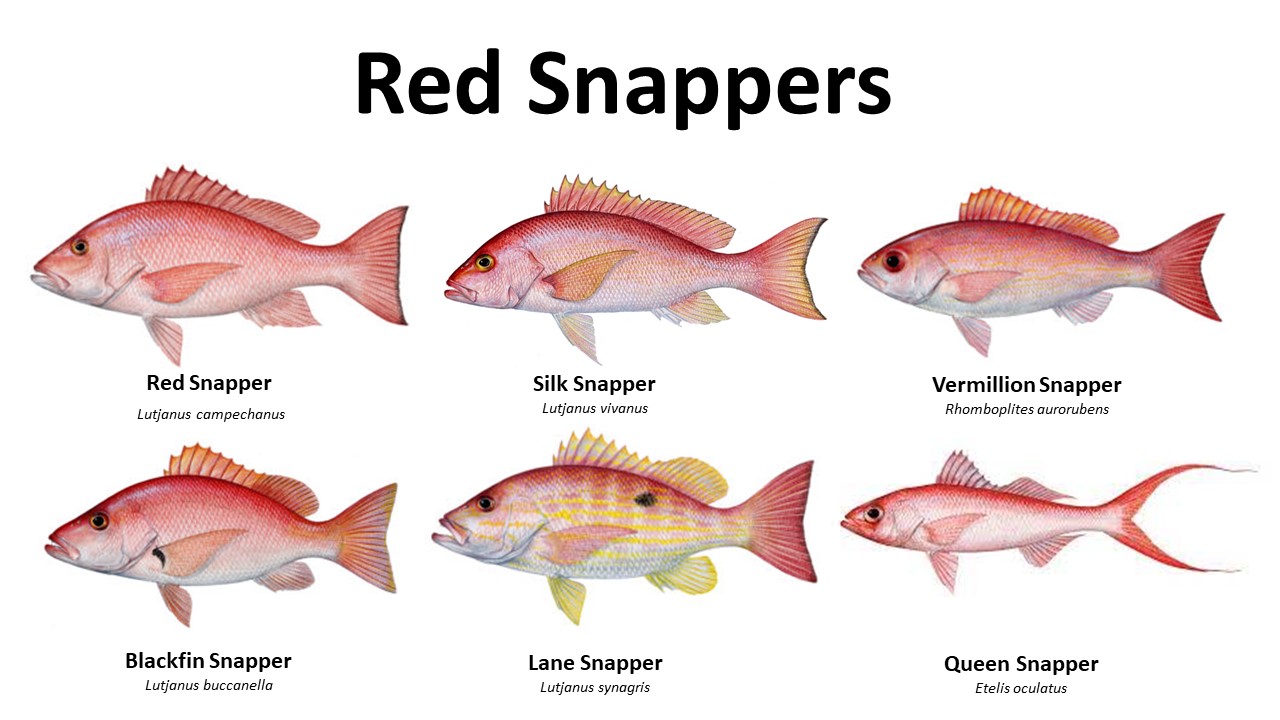 Red snapper can be found from Massachusetts to Brazil however they are uncommon North of the Carolinas. These fish can inhabit a variety of habitats from reefs, wrecks, sand bottom, mud bottom, potholes and often aggregate. Depths in which red snapper can be found in varies upon location but can be anywhere from 30-620 ft! In the Panhandle, pier fishermen have been known to catch red snapper while here in SW FL they more commonly are found in depths ~100ft +.

Red snapper can live to be 40-50 years old with the oldest specimen aged being 57! These snapper can mature at 2 years of age which corresponds to 12-16 inches. Reproductive capabilities of the red snapper greatly increase with size; one 24 inch female (about 8 years old) can produce the same amount of eggs as 212 17 inch females (about 5 years old)! That’s why it’s so important to make sure our big fish are released safely during the months when harvest is closed. Red snapper can spawn multiple times per spawning season which occurs during the summer months. Spawning ensues in the early afternoon to dusk hours and with females expelling buoyant pelagic eggs that are externally fertilized by the male and hatch within 20-27 hours. Red snapper larvae settle out of the water column about 20 days after hatch and inhabit open rocky/shelly bottom.

Watch the video to learn more facts and how to fillet this beautiful and tasty fish!

When sustainability is considered, red snapper can be a good alternative by the Monterey Bay Seafood watch program depending on method of capture, more can be read on the link provided below. This species has undergone some major regulatory changes to rebuild its stocks and has recovered to a great degree. Juvenile red snapper inhabit the same bottom that shrimp trawlers fish in. These young snapper feed on invertebrates living on the same bottom as the shrimp. The introduction of bycatch reduction devices (BRDs) on the shrimp nets that were made mandatory in 1998 greatly reduced this species as bycatch in shrimp nets and were one of the measures that helped the red snapper bounce back.

This species does not handle barotrauma well and venting or descending devices should be considered when releasing red snapper caught in deeper depths! Learn how to properly vent a fish here!

To read more about the red snapper check out these pages: