Skip Navigation or Skip to Content
Home » UF/IFAS Extension Taylor County » What Should We Know About Shark Attacks?

What should we know about shark attacks?

The Gulf of Mexico is the ninth largest body of water in the world and is home to a huge variety of marine life. This marine life includes more than 1,443 finfish species, 51 shark species, and 42 ray/skate species as well as many, many others.

Some of these shark species are subject to recreational fisheries and targeted by anglers from shore, inshore and offshore. More info about shark regulations at https://myfwc.com/fishing/saltwater/recreational/sharks/. 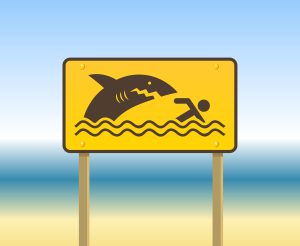 During 2022 there had been reported several shark attacks around Florida, possibly including attacks from Bull sharks (Carcharhinus leucas) based in the description of the people involved in the incidents. Bull sharks prefer shallow coastal water, which means they can often come into contact with humans, and they are often considered to be the most dangerous sharks to humans because of their aggressive tendencies and ability to migrate up rivers. However, shark attacks are extremely rare.

The bull shark’s diet consists mainly of bony fish and small sharks, including other bull sharks, and stingrays. Their diet can also include turtles, birds, dolphins, terrestrial mammals, crustaceans, and echinoderms. They hunt in murky waters where it is harder for the prey to see the shark coming. Bull sharks have been known to use the bump-and-bite technique to attack their prey. After the first initial contact, they continue to bite and tackle prey until the prey is unable to flee. The bull shark is a solitary hunter, though may briefly pair with another bull shark to make hunting and tricking prey easier. Sharks are opportunistic feeders, and the bull shark is no exception to this.

Not all encounters with sharks can be characterized as “attacks.” Studies have suggested that a more accurate method of reporting incidents involving sharks and humans would place the encounters into one of four categories, rather than calling every encounter an attack.

Such categories could include:

2. Shark encounters in which there is no bite but that may involve contact with a kayak, surfboard, or other object

Most shark attacks report in Florida include the three first options, and fortunately no fatalities has been reported to date.

Attacks on humans occur when sharks are hungry, harassed, or, in some cases, defending territory, though many interactions with humans appear more likely to be due to mistaken identity. Provocation is heightened by the kicking or thrashing vibrations people make in the water (which to sharks resemble the irregular movements of a wounded fish), the presence of speared fish or bait in the water, or the presence of blood from wounds or menstruation. Most injuries occur on the lower limbs and buttocks. The Florida Museum is the repository at the International Shark Attack Files (https://www.floridamuseum.ufl.edu/…/maps/na/usa/florida/). You can check the Florida map with reported shark attacks in their site.

The Nature Coast and Big Bend regions of Florida’s Gulf coast offer the best natural conditions for these top predators. Despite their abundance, the chances of an attack are considerably low. Our county artificial reef monitoring program has reported presence of Bull sharks during the dives in most of the sites with no incidents to date, and it is very common to see pictures and videos of sightings of sharks in shallow waters by recreational anglers and fishing charter captains. As top predators, the presence of bull sharks is an indicator of a very healthy coastal and marine ecosystem, and they play a key role in the eradication of sick and injured fish that might spread diseases in natural populations of fish.

So, what should you do if sight a shark while you are boating or swimming? First, remain calm, remember they perceive sudden and erratic movement and splash as a potential prey. Slowly swim to a safe zone, towards a boat or shore. Maintain a vertical position in the water and always keep an eye on the animal. If possible and available, place a hard object between you and the shark. If you are spearfishing, do not fight sharks wanting your fish, it is not worth; remember they are after the dead fish and not after you, so use your fish to scape a potential attack. Always have an observer on board as they can spot a shark and request all swimmers to leave the water. Do not go in the water with open wounds or menstruation.