Ready for Scallop Season? Take Your Marks, Get Set, GO!!!

Scallops are bivalve mollusks that live in shallow waters close to shore along Florida’s Gulf Coast, from Pensacola to the Florida Keys, and have a characteristic 40 blue eyes along the shell borders. They are quick swimmers that allows them to move short distances and escape from natural predation. They are also very precious due to its inner muscle that is a delicacy. Scallops have both types of gonads, so they are hermaphrodites, but during the spawning season they only release one type of gamete (eggs or sperm).

When can you go scolloping?

Like many other filter-feeders, scallops have a high growth rate in a short period of time. The peak of scallop spawning in Florida occurs between September and January, with most scallops spawning after the close of the harvest season, with a spat recruitment peak in December. In Florida, scallops have an average lifespan of about a year and are particularly susceptible to short-term and long-term environmental events, such as changes in salinity, algal blooms, and habitat loss.

The scallop fishery was initially a commercial fishery in Florida from Pensacola to Florida Bay. However, the scallop population began to decline in the 1960s. Perhaps due to habitat loss, water quality problems, overfishing, and failures in recruitment, so it was closed in 1994. According to the FWC, Bay Scallop management began in 1985 and has been modified periodically since then in response to a variety of changes in the fishery ranging from declines in the distribution and density of scallops to signs of local recovery. Since 2002, the permitted harvest zone has included all state waters from the west bank of the Mexico Beach Canal in Bay County to the Hernando-Pasco County line, with only recreational harvesting permitted (https://myfwc.com/license/recreational/).

Scallops are a very important commodity for coastal counties, and they bring tourists that spend their money in local coastal businesses. In a 2007 survey, UF/IFAS Extension and Florida Sea Grant determined an average expense of $200/boat/day in Taylor County, which represented an estimated $4.7 Million in revenues. Check the scallop update at https://www.facebook.com/TaylorCountyExtension/videos/773167190047782. 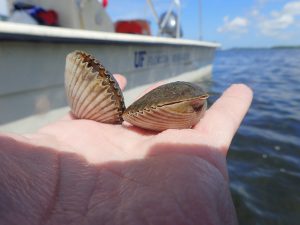 Currently, there are 5 harvesting zones (http://myfwc.com/fishing/saltwater/recreational/bay-scallops/). Dixie County and part of TaylorCounty, to the Fenholloway river, is the zone that opens the harvesting season from June 15 to Labor Day, on Monday, September 6. In this harvesting zone, from the opening date to June 30th, there is a half bag limit (1 gallon whole per person and max 5 gallons whole per boat), which doubles from July 1st to Labor Day. REMEMBER! The limit is to the handle of the 5‐gallon bucket, not to the top. There is high variability in scallop population over the years due to different environmental factors. However, Taylor County is one of the most pristine areas with seagrass where scallop populations still sustain a harvesting effort.

The main habitat for the bay scallop is shallow‐water seagrass beds. However, they can also be found on the mixed bottom, even though it is not preferred. The State waters of Dixie‐Taylor county include the Big Bend Sea Grass Aquatic Preserve. Certainly, the seagrass beds represent a limiting factor of bay scallop distribution. Therefore of the fishing areas visited by recreational harvesters. The seagrass beds have not shown significant changes with time. Especially due to their protected status as the Big Bend Seagrass Aquatic Preserve area creates some restrictions. However, the increased number of boaters over time has created prop scars on seagrass that result in habitat.

Boaters must make reasonable efforts to stay at least 300 feet away from divers‐down warning devices in open water and at least 100 feet away in rivers, inlets, or navigation channels. Divers must make a reasonable effort to stay within 300 feet of a divers‐down flag or on open water. A divers‐down warning device may not be displayed when divers are out of the water. REMEMBER: DO NOT KEEP THE DIVE‐DOWN FLAG UP AND DISPLAYED WHILE CRUISING! (http://myfwc.com/boating/regulations/)

Different interest groups consider that the fishery has had a good economic impact on the local community in the last years and that the resource has performed well and there is still enough spawning population (about 2.5 Million scallops) to provide a good generation for the following season. However, we recommend the adoption of best practices divided into three categories: Safety, Harvesting the scallops, and your Waste management. An important part of sustaining scallop populations starts from the principle of protecting the seagrass beds. So, remember to Avoid seagrass as much as possible; Slow down while boating over seagrass, and Trim your motor when boating over very shallow seagrass beds.

TIP: scallops are distributed in patches so scout the area and where you find some, you’ll find many. If you scout and can’t find any, move to a different location. Also, they are a little bit deeper, on 4 to 7 ft of water, and even more.

Adopt the recommended good practices to sustain this incredible natural resource and report any violation of the regulations to FWC Hot Line 1‐888‐404‐3922. This will make sure you and others can come back to enjoy this family‐oriented activity. Look forward to seeing y’all in the water. Be safe and enjoy.

I’ve learn some excellent stuff here. Definitely value bookmarking for revisiting. I surprise how much attempt you set to make one of these magnificent informative site.

Great post. I was checking constantly this blog and I am impressed! Very useful information specifically the last part :) I care for such info much. I was seeking this particular info for a long time. Thank you and good luck.

Hi my friend! I want to say that this post is awesome, nice written and include almost all significant infos. I’d like to see more posts like this .

I think other site proprietors should take this web site as an model, very clean and excellent user genial style and design, as well as the content. You're an expert in this topic!

Thank you for your comment! It keep us motivated to continue sharing valuable information with our clientele.

I’m not that much of a online reader to be honest but your blogs really nice, keep it up! I'll go ahead and bookmark your site to come back later. Many thanks

Very well written story. It will be valuable to anybody who employess it, as well as yours truly :). Keep doing what you are doing - for sure i will check out more posts.

That is crazy that a collision with some form of wildlife happens almost every 39 minutes. I didn't know that you had to report the accident to the police if you did hit an animal. I will have to make sure I call the police and report it if I ever hit an animal. Thank you for the information!

Greetings! This is my first visit to your blog! We are a group of volunteers and starting a new project in a community in the same niche. Your blog provided us useful information to work on. You have done a wonderful job!