A student majoring in Environmental Management of Agricultural and Natural Resources used a hike in the Andes Mountains this spring to complete a class project. Sarah Birkmire was taking GIS for Soil and Water Science (SWS 4720C) when her Spring Break travels took her to Peru. She used the opportunity to complete the course’s term project – make a map using GPS data.

“My girlfriend and I really wanted to go on a trekking trip in Peru,” Birkmire said. “We wanted to go to Machu Picchu, but our friend from Peru suggested that we check out Choquequirao as well.”

The Path to Choquequirao

The Incan ruin is located in the Andes region of southern Peru. Founded in 1536, the Incans abandoned the site in 1572. An outside explorer discovered it 150 years later.

“Choquequirao is located high in the clouds at 10,010 feet,” Birkmire explained. “The only way to get there is to hike the treacherous path through the mountains.”

“Some folks make it out to Choquequirao and back in two days, but we wanted to take our time,” she said. “Thank goodness we did, because considering how heavy our packs were and how difficult the trail was, we would not have been able to make it in two days.”

Birkmire says the 14.2 miles of trail is deceptive because the terrain is rocky with great changes in elevation that occur rapidly.

“We carried our giant packs until the fourth day when we broke down and hired a muleteer from a local village,” Birkmire said. “If you decide to do this hike, either pack light or rent donkeys. Do not carry five-days of food and a three-person tent like I did. Ouch!”

Birkmire recorded their path through the mountains using a GPS unit. Her choice was the Garmin eTrex 10 handheld GPS unit. It is inexpensive, water-resistant, and uses either rechargeable or standard AA batteries. She practiced using it on a local trail before taking it on the hike to Choquequirao.

When creating a map using GIS software, it is necessary to select a base map to function as a backdrop. For a hiking map such as this, a topographic map was the logical choice. Birkmire also chose a digital elevation model (DEM) so that spatial analysis could be conducted. The DEM made it possible to analyze the difficulty of the hike by tracking changes in elevation.

Birkmire imported the GPX points from the GPS. In ArcMap, the points are converted into a feature class, and this made it possible to digitize the path taken during the hike. Various waypoints, including villages, water sources, and viewpoints, are also on the map.

“As I hiked, I saved various waypoints when I reached villages, water sources, and viewpoints, and then imported the GPX data as point features,” she explained. “I customized the symbols and added labels to the points.” 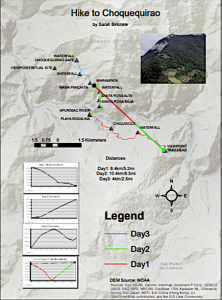 Susan Curry, a senior lecturer in the UF/IFAS Soil and Water Sciences Department and the course instructor, said Sarah is an impressive student who took this challenge to its “highest” level.

“The viewshed analysis at Marampaza showed the potential panorama with some amazing photos included,” Curry noted. “Her map presentation was inspiring to our like-minded trekkers and even made me want to go hiking (small hills).”

Birkmire said creating a hiking map was an exciting way to learn GIS basics, and she intends to use her GPS to create her own maps again in the future. Garmin offers its own GIS software to its customers, and she intends to utilize the tools available to inform other hikers in the online community. For her next international trek, Birkmire hopes to hike Mt. Fuji in Japan.

Mike Loizzo is a communications specialist with UF/IFAS. He has more than 20 years of experience in journalism and communications. Mike worked at radio and TV stations in the Midwest and Southeast over his broadcasting career. You can reach Mike at (352) 294-3127 or mloizzo [at] ufl [dot] edu.