When you think of rice production, what is the first thing that comes to mind? The rice paddy fields of China, perhaps? China is by far the largest producer – and consumer – of rice in the world, followed closely by India. But where does the United States rank? Not in the top ten. According to the U.S. Department of Agriculture, the United States accounts for less than two percent of global rice production. And Florida produces a tiny share of that small percentage.

Rice production in the Everglades Agriculture Area (EAA) dates back nearly seven decades. It was short-lived though because the white leaf virus (‘hoja blanca’) in the late 1950s led to quarantine in the state. Farmers reintroduced it 20 years later, this time as a rotation crop with sugarcane. You see, the net value of growing rice in the EAA on sugarcane land exceeds its monetary return. 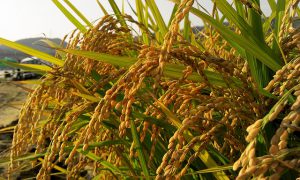 As an assistant professor with the University of Florida Institute of Food and Agricultural Sciences (IFAS) Soil and Water Sciences Department, I study the effects of growing rice. The research I conduct at the UF/IFAS Everglades Research and Education Center (REC) in Belle Glade focuses on soil, water, and nutrient management. There are great environmental benefits from the roughly 25,000 acres of planted rice in the EAA.

Growers greatly reduce soil subsidence, nutrient depletion, and insect pests by flooding fields. One major concern in the EAA is soil loss due to oxidation, or “soil subsidence,” which is the loss of topsoil due to decomposition of organic matter. Typically, a deep water table and high temperatures tend to aerate the topsoil, which in turn accelerates decomposition. Flooding fields to grow rice effectively stops the subsidence of highly organic “muck” soils during the hot summer months. This adds years to the productive life of the farmland.

Rice cultivation in the EAA is unique compared to other rice-producing regions in the country because it does not need additional nitrogen, phosphorus or potassium fertilizer to grow. It simply uses what’s in the soil and irrigation water. The plant metabolizes these nutrients during growth, and at the time of harvest, only the grain portion of the rice plant is removed. Rice straw and roots are incorporated back into the soil after harvest. As those decay, they release nutrients for the next crop. Furthermore, production inputs like silicon, used to boost rice yields, have a carryover benefit to the next sugarcane crop.

Research into the state’s rice production is ongoing. The Florida Rice Growers Inc. provides funding support each year to UF faculty to conduct research on new projects. Some exciting research in the pipeline includes variety trials of new rice cultivars, evaluating the effect of water drawdown on rice yields, the effect of micronutrients, such as manganese, on rice yields, and the response of flooded rice cultivation on soil health indicators.

On August 21, my colleagues and I hosted the third annual Florida Rice Growers field day at the Everglades REC. Fifty-two guests attended, learning about various aspects of rice cultivation in the region. They included growers, educators, regulators, and locals curious about the crop. Hands-on field demonstrations and indoor presentations on topics pertaining to water management, rice variety trials, pest management, and insight into post-harvest processing were covered. We hope you can join us next year! Until then, you can follow my rice research efforts on Twitter @UFSustainableAg.