Tide Is High But We’re Rollin’ On After Ian

Hurricane Ian swept south of Putnam County on September 29, 2022 as a tropical storm, closing down all the businesses, schools and County offices.  It brought high tides and left lots of rainfall in its wake, but the farmers here were mostly just thankful that we were not part of wrath that unfolded to the south.  Most of our row crop farmers are in transition, tilling and prepping the soil for the upcoming cash crop (mainly cabbage or potato).  For those that still had vegetative stands of cover crop like sorghum sudangrass or sunn hemp, these fields dried out quickly.  For 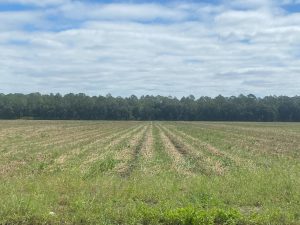 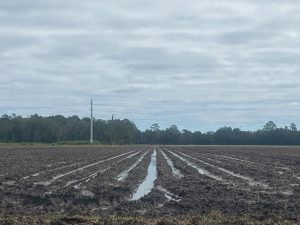 others that had already chopped in their cover crop and worked their fields, drainage was much slower and standing water was evident the day after the storm.  L&M Farms had planted approximately 80 acres of cabbage in the weeks preceding the storm, so these transplants spent about 24 hours completely submerged.  Whether they survive and succeed is yet to be seen.

One of the hardest hit areas was along the St. Johns River, at the mouth of Deep Creek.  Worldwide Aquaponics has repurposed the former Anguilla fish farm and become a highly productive aquaponic facility that grows lettuce, tomatoes, peppers, herbs, cabbage, greens, and all kinds of healthy foods for local farm workers and schools.  They are well-diversified as they harvest tilapia, raise shrimp, and even provide yaupon holly leaves for tea. 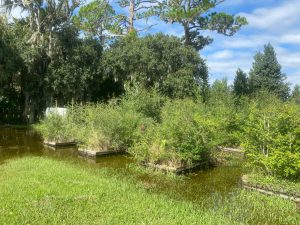 Despite their raised beds, the yaupons in the low-lying area are clearly not thriving as well.  Farm Manager, Angela TenBroek, received the prestigious Agriculture Woman of the Year from the Florida Department of Agriculture and Consumer Services.  Her farm is highlighted in the video seen here: https://www.youtube.com/watch?v=cgHbR9AdqK8

For the most part, this facility operates in an environment where temperature, rainfall, humidity, and disease exposure can be controlled.  However, when major weather events like Hurricane Ian bring rains and high tides, this 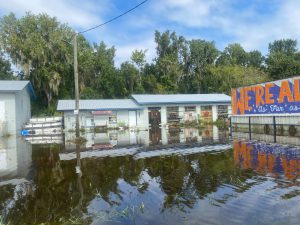 facility is very vulnerable.  Hurricanes eventually devastated the lucrative fish farm that operated here for over 35 years.  After 7.5 inches of rainfall and 5.1 feet of storm surge along the St. Johns at Deep Creek, the grounds at the facility appeared as a lake.  The National Weather Service has recorded tidal influences along the St. John’s River and other areas across North Florida. 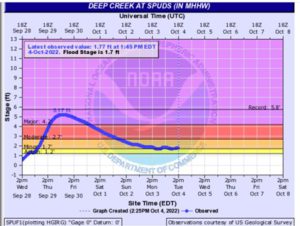 After further inspection at Worldwide Aquaponics, the deep water cultures in the greenhouses, the fish ponds, the warehouse and cold storage were fine.  The office, the shop and hoop house did experience severe damages from flooding and wind.  As the waters recede, Angela is back on her feet and is preparing to plant her next crop.  She is also sharing valuable equipment and providing education to local schools so they can build their own

aquaponic systems.  Renee Hough, Director of Career and Technical Education for the Putnam County School District, is orchestrating the logistics, providing funds and continuing to provide innovative opportunities for career development among our young people.

The fern industry in South Putnam also took some hard hits from the storm.  Shade cloth was ripped off and structures were comprised in the swirling winds that shifted from the north to the west as the storm strolled by.  Estimated damages to crops, structures, and labor for cleanup up is estimated to be approximately $2.2 million.  Vineyards were shaken but not destroyed, as the grape harvest was wrapping up prior to the storm.  Blueberries, mostly situated on the western side of the County, did not incur any damages.  The Putnam Hall FAWN weather station that is located in West Putnam only reported 1.96” of rain during the storm, while the FAWN station in Hastings recorded 8.9”.  It was remarkable to see how different the conditions were from one end of the County to the other.  But all in all, Putnam County did remarkably well considering the devastation across the State.  We continue to send our thoughts and prayers to those that suffered tremendous loss from Hurricane Ian.