The winter weather arrived a bit late in Putnam County, but it is certainly making up for lost time.  A “freeze” occurs when temperatures drop below 32ºF, but a “hard freeze” is when temperatures dip down below 28ºF for at least a few hours.  Although it is only a difference of 4ºF, this can have a major impact on our commercial agriculture producers.  On the morning of January 30th, 2022, we experienced a hard freeze.  According to the UF Florida Automated Weather Network (FAWN), Hastings and Putnam Hall experienced temperatures below 28ºF for 5 hours and 8 hours, respectively.  The predominant edible crops that were most vulnerable were cabbage, potatoes and blueberries.

Cabbage planting started in mid-September and ended the third week of January for most growers.  Therefore the maturity of the cabbage crop depends on the field and when it was planted.  Young transplants are vulnerable to the hard freeze temperatures and one approach is to run water through the furrows to keep temperatures above freezing in the immediate vicinity of those young transplants.  Cabbage that is nearing maturity with fully formed heads may even be more susceptible.  According to Mr. Tommy Miller, farm manager for Greene Farms, frost can damage the outer tissue of the cabbage heads which leads to problems with white mold spreading throughout the crop prior to 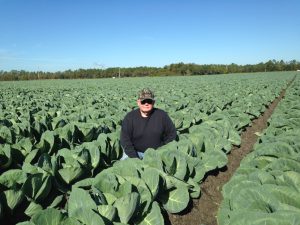 harvest.  It is difficult to assess exactly how much damage has occurred from the hard freeze for a week or so until the symptoms become visible.  Mr. Miller hopes that the preceding cold snaps over the previous few weeks have toughened up most of the cabbage crop so that it will be more tolerant to the hard freeze.

Potatoes in our area are planted from late December through mid-February.  Potatoes, depending on the variety and precise weather conditions, generally emerge from the ground 21 days after planting.  Some of the earlier planted potatoes that were emerging at the time of the hard freeze were certainly the most vulnerable.  As you can see in the photograph below, potatoes planted by Tidewater Farms on January 6, 2022 were just starting to crack the ground 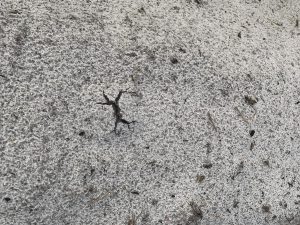 and emerge on January 27, 2022.  These fledglings are the ones that farm manager Michael Mathis spent some extra time covering up before the hard freeze.  He said that the cold air can seep down into the cracked soil and cause severe damage to the crop at this young age.  For protective measures, he ran equipment through the field that threw soil from the base of the furrow and onto the top of the row to serve as a blanket.  After the freeze, he had to uncover the young crop.  For those planted later, the seeds were well protected beneath the soil since soil temperatures remain much warmer than the corresponding air temperature.  As an example, according the FAWN, air temperatures dropped as low as 25ºF on January 30, 2022 in Hastings but the lowest corresponding soil temperature detected at 4 inches below the ground surface was 50ºF.  Many farmers received their potato seed a bit late this season because of trucking issues associated with the pandemic.  So those that planted their potatoes a bit later this year did not see any damage from the hard freeze.

Our blueberry crops are mostly situated in the western portion of the County, so Putnam Hall has the closest FAWN station.  However, Chance Clay indicated that temperatures on his berry farm in Florahome dropped even lower than 24ºF which was reported in Putnam Hall.  Freeze protection was used on most of our berry farms during the hard freeze.  Overhead sprinklers were turned on as the temperatures began to fall below freezing in order to freeze the 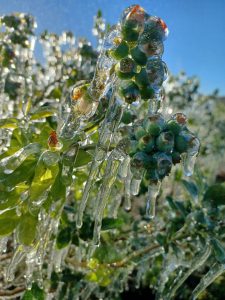 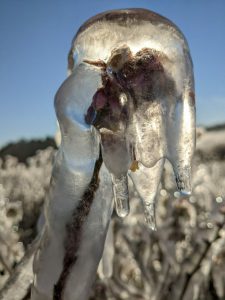 Ideally, the plants receive 1/2 to 1 inch of water per hour and the moving liquid remains near 32ºF.  Thus when the temperatures continued to drop to 24 ºF, the plant and corresponding flower were protected within the wall of ice at a comfortable 32ºF (see photograph on the left). The challenge is pumping enough water to maintain the ice layer.  Since the hard freeze lasted 8 hours, the aquifer may be pumped dry and the growers are left without adequate water supply to maintain their protection.  The estimated loss was 10% of the local blueberry crop during the hard freeze.  A mild freeze, albeit surprisingly cold after a few weeks in the 80’s, occurred the morning of March 13, 2022.  The temperatures dipped below 32ºF for a couple of hours a Clay Berry Farms and so freeze protection was established to protect the fruit set (see photograph on the right).  Thanks to our responsible and diligent farmers in Putnam County, we will hopefully enjoy a bountiful blueberry harvest in April.

The author is employed by UF/IFAS Extension, University of Florida, Institute of Food and Agriculture –  An Equal Opportunity Institution.