Take a sneak peek with this excerpt from the article: The black salt marsh mosquito, Aedes taeniorhynchus (Wiedemann), is very common in the eastern coastal areas of the Americas, and is responsible for a large part of mosquito insecticide applications in Florida (Connelly and Carlson 2009, Koehler and Castner 2008). Although it is not a primary vector of major concern, it can transmit pathogens to humans and other animals. Its characteristic emergence in large numbers after rains and flooding events as well as its aggressive biting contribute to its notoriety as a pest insect. The black salt marsh mosquito is considered a nuisance in Florida. It is sheltered from large-scale mosquito control as part of the Everglades National Park conservation program to preserve their delicate ecosystem (Day et al. 2004). 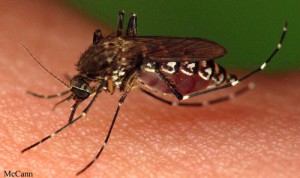