Take a sneak peek with this excerpt from the article: Parapoynx diminutalis Snellen is an adventive Asian moth with an aquatic larval stage. The moth is found associated with a variety of water bodies including river backwaters, lakes, and ponds (Habeck 1996). The aquatic larvae commonly attack hydrilla, Hydrilla verticillata (L.f. Royle), and other aquatic plants (Buckingham and Bennett 1989, 1996). 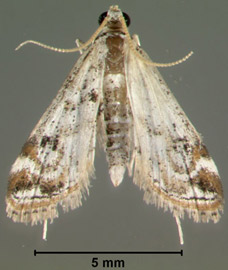 The moth was identified in 1971 in India and Pakistan during scouting trips to attempt to determine potential biological control agents for hydrilla. Despite having potential for hydrilla destruction, the moth was declared to be a generalist feeder and unsuitable for release into U.S. water bodies for hydrilla control (Baloch et al. 1980). However, the moth was later found in Florida in 1976 by United States Department of Agriculture technicians who were testing herbicides for hydrilla control. The larvae (caterpillars) found on hydrilla were observed to be eating the invasive weed. The pathway, method, or time of the moth’s introduction remains unknown (Del Fosse et al. 1976).