Greater Amberjack Seriola dumerili is considered overfished and overfishing is occurring in the Gulf of Mexico but not in the South Atlantic Ocean. In the Gulf, Greater Amberjack populations have not been recovering for more than 20 years, and the reasons are unknown.   To address management and stakeholder concerns about the Greater Amberjack fisheries in both regions, Congress authorized funding for a Greater Amberjack Research Program.

Scientists at Auburn University have tagged 1,200 Greater Amberjack from Texas to North Carolina (including individuals that were tagged off Key West, Florida) and are offering a $250 reward.   If you catch a tagged Greater Amberjack, cut off both of the tags at the steel leader where it is inserted into the fish and keep the yellow and red portion.  There is a phone number on the tag to call for reporting instructions (1-833-515-5137).

Greater Amberjack in the Florida Keys

As frequently happens in the Florida Keys, since these fish migrate in schools along with other jack species (Almaco Jack, Lesser Amberjack, and Banded Rudderfish) we likely get fish visitors from both of these stocks!   Most Greater Amberjack are caught recreationally (73%) and 27% are caught commercially.  Monroe County has the largest commercial Greater Amberjack fishery in Florida.  Researchers have found Greater Amberjack spawning peaks in South Florida during May-April, and there are sites where they mate and form spawning aggregations in the Florida Keys (Harris et al. 2007).  These fish also migrate to the Caribbean.  Tag retrieval is important to track where these fish were tagged, and where they were caught!

The tagging study will only be successful if anglers report the capture of tagged Greater Amberjack, and the $250 reward per tagged fish is to encourage angler participation. External tags may be located on either (or both) side(s) of the fish so be sure to check both sides of the fish if you catch one.  Undersized and legal sized fish have been tagged.  If you plan to catch and release the fish, you can still cut off both tags and collect the $250 reward from a fish you plan to release.  Don’t pull the tag out out of the fish — cut near the area of insertion and keep the tags.  Clip the tag(s) off and call our Tag Return Hotline (1-833-515-5137), which is printed on the tag.  It is very important that you clip off the tags because you cannot collect a reward without mailing us the physical tag.  If you have captured a tagged fish, please read the detailed Greater Amberjack Tag Reporting Step-by-Step Instructions.  If the fish is out of season or undersized, you can still cut the tags before releasing the fish back to the water. 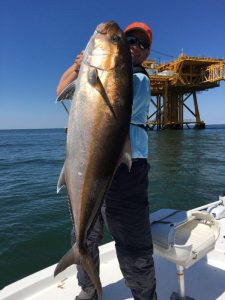 For 2022, the Gulf of Mexico season is open from September 1 to October 31 in state and federal waters compared to the year-round open season in the South Atlantic Ocean. The minimum fork length is 34” in the Gulf compared to 28” in the Atlantic, with the same daily recreational bag limit of one fish per angler. Greater Amberjack is a long-lived fish (~17 years) that reproduces around 4 years of age and can grow to 200 pounds and 6 feet long. Greater Amberjack are distributed throughout the globe, and can be found in the Mediterranean, Pacific, Indian Ocean, Atlantic, and the Gulf of Mexico. Greater Amberjack is a good tasting fish and makes a great smoked fish dip. There are two similar species, the Lesser Amberjack and the Banded Rudderfish. 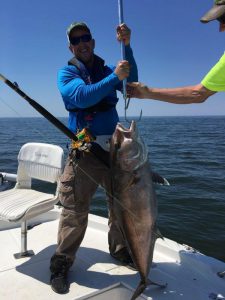