In January 2019, a student at College of the Florida Keys was the first to report and photograph the spread of stony coral tissue loss disease off Key West, Florida at the Eastern Dry Rocks. He was able to identify the disease because he was trained by Florida Sea Grant agents Shelly Krueger and Ana Zangroniz and completed the UF/IFAS Extension Stony Coral Tissue Loss Disease Underwater Observer Training course. Stony coral tissue loss disease is devastating Florida’s Coral Reef and the Caribbean, and infects more than half of the 45 species of stony corals that live in our region. Thankfully, staghorn and elkhorn coral are not susceptible.

After infection, the disease rapidly kills young colonies and corals that are hundreds of years old. These foundational reef-building stony corals are vital for the habitat they create for hundreds of species of fish, invertebrates, and marine animals. Healthy coral reefs support jobs and the economy through tourism and fishing, and protect the land from hurricanes and storm surges. Since four of these stony coral species are already listed under the Endangered Species Act, it is critical that scientists and the public work together to save these beautiful animals.

Stony coral tissue loss disease was first identified in 2014 near the Port of Miami and spread throughout Florida’s Coral Reef by 2021, and at least 16 countries in the Caribbean, most recently Roatan, Honduras. The pathogen(s) have not been identified but an alphabet soup of federal, state, and local governments, nonprofits, and the University of Florida are working non-stop to defeat stony coral tissue loss disease.  Zoos and aquariums throughout the US are holding rescued corals to preserve genetic diversity. While the situation is urgent, it is 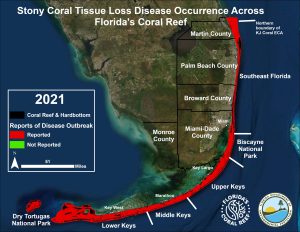 not too late to save these incredibly important ecosystems. Corals are resilient if given the chance and the enabling conditions for their growth and survival.

The citizen science training developed by Florida Sea Grant agents has been used to document the spread of the disease in South Florida and the Caribbean by snorkelers and SCUBA divers. Volunteers are trained to identify and photograph the susceptible species and report these data to the Florida Department of Environmental Protection Southeast Florida Action Network (FDEP SEAFAN.net), which scientists monitor to track the extent of the disease and coral recovery. Learn more at the Florida Keys National Marine Sanctuary Coral Portal and if you are interested in scheduling a 4-hour training workshop for your group, please contact Shelly Krueger at the UF/IFAS Monroe County Extension 305-292-4501 or shellykrueger@ufl.edu.