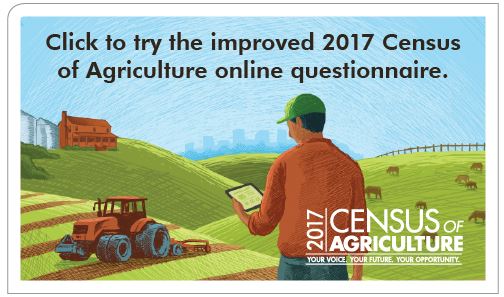 The Census of Agriculture Deadline is February 5

This census highlights the land use and ownership, operator characteristics, production practices, income and expenditures, and other topics. For example, the 2012 Census of Agriculture revealed that over three million farmers operated more than two million farms, spanning over 914 million acres. This was a four percent decrease in the number of U.S. farms from the previous census in 2007. However, agriculture sales, income, and expenses increased between 2007 and 2012.

Everyone who received the 2017 Census of Agriculture questionnaire is to return it, even if they are not currently farming. The first few qualifying questions on the form will determine whether completing the entire questionnaire is necessary.

Hurry up, the deadline is February 5!

NASS will begin following-up with additional mailings, e-mails, phone calls, and personal appointments. To avoid these additional contacts, farmers and ranchers are asked to complete their Census as soon as possible.

← What you should know about Sugarcane Mosaic Virus (SCMV) affecting St. Augustinegrass.
Watching out for Late Blight Disease on Tomato Plants! →