In a previous blog, we discussed the pernicious Air Potato vine (Dioscorea bulbifera) and the charismatic bright red or orange biocontrol beetle (Lilioceris cheni). The air potato beetle was discovered, researched, reared and made available for Florida residents via an online request form. Since that article, the proliferation of beetles throughout our area has been incredibly successful! Tens of thousands of beetles have been released. Due to the popularity of the program, many communities report having beetles, without ever releasing them. The beetles are making their own way. The agencies in charge of rearing the beetles for release have re-evaluated their dispersal methods due to the abundance of beetles.

Unlike in the past, when you could submit a request form and expect a small container of beetles to be delivered to your local UF/IFAS Extension office, request forms will now be used to prioritize community beetle releases. This means that while you can still submit requests through the online form, the requests will be collected and used to create prioritized lists of locations. Those locations will then be scheduled for community beetle releases by industry representatives.

What you can do

Control of air potato vine is difficult, it grows 8 inches in one day! Below are recommended control methods:

In order to support the rearing efforts, our office will be collecting air potato bulbils. Seen here: 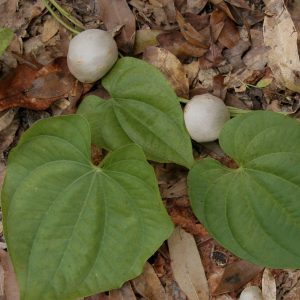 You can bring the bulbils into our plant clinic Mon, Tues, Thurs or Fri. between 9 a.m. and 4 p.m. We will periodically ship the bulbils to the rearing location to provide delicious and nutritious dinners for the beetles.

If you are interested in learning more about the state of Florida biocontrol program see the following resources:

Residential Horticulture Agent and Master Gardener Coordinator. While not a Florida native, Alyssa has lived in Florida for almost 20 years, exploring Florida's wild places. She approaches her role from a background in Ecological Sciences and hopes to ignite a love of the natural world through gardening in her programs.