A native of Malawi, 25-year-old Mika Mzumara is banking skills to help African farmers increase their income with smart production and marketing.

This year Mzumara will serve an internship directed by Lorenzo Rossi, a plant root biologist at the University of Florida’s Indian River Research and Education Center in Fort Pierce, central to the state’s grapefruit production region. The center, or IRREC, is part of UF’s statewide Institute of Food and Agricultural Sciences, with 13 research locations in each of the state’s important agricultural regions.

“Mika will carry out field and greenhouse studies for peaches and citrus tree root system architectures,” said Rossi. “He will use mini-rhizotrone technology, or 2-dimensional cameras, to capture finite images of root architecture in peach trees. For citrus trees, he will measure micro-nutrient uptake and how it affects root growth and development.” 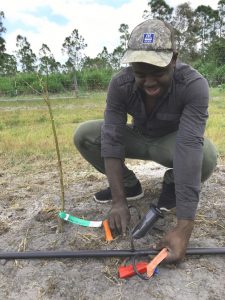 “Mika will carry out field and greenhouse studies for peaches and citrus tree root system architectures,” said Rossi. “He will use mini-rhizotrone technology, or 2-dimensional cameras, to capture finite images of root architecture in peach trees. For citrus trees, he will measure micro-nutrient uptake and how it affects root growth and development.”

Mzumara said the root biology studies will add another layer of knowledge to the skill bank he will use to lift Malawi’s farmers up and out of poverty. He believes food production is critical to the sustainability of his nation and that farmers must participate in cooperative growers’ organizations to gain more economic control for their products.

Mzumara grew up in northern Malawi, in a district called Nkhata-Bay. During his youth, Mzumara realized that although his family and neighbors are dependent on agriculture, only a few are able to live comfortably. Farmers who earn at a higher level produce their crops within walking distance to commercial areas and towns.

“My interest in food production is driven by the fact that most farmers don’t benefit from agriculture,” said Mzumara. “The growers do not get the benefit they deserve from agriculture, and I want to help change this. Farmers need direct access to buyers.”

Mzumara identifies intermediaries, or food brokers, who pay under market prices for the farmers’ fresh farm products, as the point of opportunity he will help the farmers leave poverty. He said the development of a growers’ cooperative would unite the producers in their efforts to reach direct buyers such as restaurant and grocery store owners. A second issue the growers face is a lack of transportation and refrigeration to sustain fresh food for delivery.

“Malawi farmers live in rural areas, and most do not have electricity or automobiles,” Mzumara said. “A group of farmers could work together, combine funding, and buy shared refrigerators and a delivery truck.”

The UF internship is another step in Mzumara’s plan to assist Malawi’s agrarian community. Through his work supervised by Rossi, he will understand plant nutrition through tree roots and soils. Before Mzumara began work at IRREC, he served a 3-month internship at the UF/IFAS Southwest Florida Research and Education Center, under the direction of Kelly Morgan, director of the center. There, his work involved sandy soil research. He also witnessed profound economic loss from a natural disaster.

“I learned how to manage nutrients in sandy soils,” Mzumara said. “And, I saw that Hurricane Irma destroyed many crops.”

Crop insurance could be a consideration for an African national growers’ cooperative. And, greenhouse production may be less vulnerable to climate warming conditions, which Mzumara said is impacting Africa’s crops. His education and internship opportunities will pay dividends to many producers, he hopes.

With Rossi, Mzumara’s work involves two experiments. The first study is an analysis; he will assist a doctorate student, Ricardo Lesmes, with a field experiment to gather data and manage the calculations for the finite study of root growth and performances. Mzumara and Lesmes will evaluate low-chill peach varieties suitable for production in the Indian River region. The study is supervised by Rossi, in collaboration with José Chaparro, Associate Professor of Horticultural Sciences, and Ali Sarkosh, Assistant Professor of Horticultural Sciences, both at UF in Gainesville. A second study will support research for Davie Kadyampakeni, Associate Professor of Horticultural Sciences specializing in citrus nutrient and water management, at UF’s Citrus Research and Education Center in Lake Alfred. The study will include grapes and oranges grown inside a greenhouse. The focus of this study is to investigate nursery citrus tree root growth and development under varying manganese levels.

“I expect to learn how to produce crops with high economic and nutritional value,” Mzumara said. “Economics, marketing, and plant nutrition must all be considered by farmers so that they can make a good profit.”

Mzumara recently completed a Bachelor of Science degree in Agricultural Sciences at EARTH University in Costa Rica. One of the first Malawi citizens to attend the Central American university, Mzumara participated in two programs funded by prestigious charitable organizations, The Dalai Lama Foundation and the Ford Foundation. He also learned that research for economics and production of new crops is imperative before an agricultural operation may begin.

“I wrote a business plan and then did research to determine if a number of tree species would be good crops for commercial production,” said Mzumara. “We set seedlings for moringa, a medicinal tree, and roble coral and gmelina trees that are cultivated for their wood. But, I found that the fruit was dry and not profitable – the research was a valuable lesson.”

In addition to economics courses, Mzumara’s most interesting lessons were in soil science and irrigation. So much of what he learned he intends to apply to African food production. But, what he was not expecting was to collaborate with a fellow African student and gain nearly $30,000 in grants to fund microagricultural production operations. He describes the project, “Dirt to Power,” as an organoponic garden built with readily available waste materials. Organoponics is a system of urban agriculture in which food is produced in a high-density land tract.

“Blessing Chukwuaja, from Nigeria, founded ‘Dirt to Power,’ at EARTH University, and we worked together to prepare a pilot program and duplicate it in Nigeria, Ghana, Togo, Zambia, Malawi and Kenya,” said Mzumara.

A video showcasing “Dirt to Power” may be viewed by clicking this link. The footage shows discarded tires, plastic bottles and old vehicles painted in bright colors that burst with well-maintained fresh vegetables and herbs. Sacks repurposed for organoponics systems hang from designed structures alongside soil crops and rows of narrow container gardens. Mzumara and team members plan is to use grant funds awarded by a Ford Foundation Challenge Grant, and a second award from the Dalai Lama Foundation, to repeat their work across the African continent.