After 25 years, do you keep chasing a dream? Collier County Farm Bureau President Matt Stephenson-Smith does.

Stephenson-Smith entered the University of Florida as a 24-year-old transfer in 1994. Decades later, he found himself still taking undergraduate courses, spending evenings after work staring into a computer screen feeling like his eyes were about to bleed.

At least two people never gave up on his dream. One, of course, was Stephenson-Smith himself. The second was UF College of Agricultural and Life Sciences Dean Elaine Turner. She knows that being in the opportunity business—helping students achieve their goals, their dreams—sometimes means being in the business of second or third opportunities.

As much as Stephenson-Smith wanted a degree, he also wanted a career in agriculture. Career leapfrogged ahead with a job offer in 1996. A grower in Southwest Florida gave him 36 hours to decide—Gainesville or Naples, degree or job.

Stephenson-Smith packed the car and drove south. Even as he succeeded in business, he felt he had unfinished business. The dream. He couldn’t see it as clearly as before, couldn’t figure out how to make the time, how to get back to Gainesville, and how to make the case for readmission with a checkered transcript. 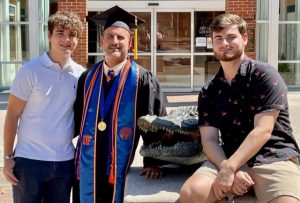 About 10 years ago, Turner, then the associate dean, helped him see the path back. It’s called “Fresh Start.” It’s a readmission opportunity under special circumstances that resets the student’s GPA. Turner collected his letters of recommendation and personal statement, mapped out prerequisites he’d need to take in Southwest Florida and cleared him for readmission.

When it came time to move to Gainesville, again, it wasn’t the right time. He was fresh off a divorce and wanted to stay near his two sons in Collier County.

That was where things stood until about six years ago, when Turner came to Immokalee to attend an event at the UF Institute of Food and Agricultural Sciences Southwest Florida Research and Education Center.

Turner recognized Stephenson-Smith across a crowded auditorium and asked for an academic progress report. By Stephenson-Smith’s telling, in that auditorium encounter Turner was academic adviser, psychologist, and motivational speaker. She encouraged him to enroll in UF Online.

It was the nudge he needed. He enrolled, with a major in environmental management in agriculture and natural resources.

By this time, it wasn’t about his career. But it was still about family. He wanted his sons to see him take care of unfinished business, to realize a dream.

Again, Turner and CALS administrators helped him find a way. Three months before graduation, after extensive self-study, Stephenson-Smith passed the certified crop adviser exam. CALS administrators advised him to convert those hours of preparation into a written thesis. He titled it “Certified Crop Adviser Exam Preparation.”

Turner approved it. Stephenson-Smith was ready to come to Gainesville in spring 2020 to walk in a commencement ceremony as an honors graduate. COVID-19 shut down in-person ceremonies, of course.

Turner’s philosophy is that there are many different paths to a degree. Some paths start through traditional freshman admission, some through transfers and others through re-entry. Turner says, it’s her job to help students find the path (or Stephenson Smith’s case, the paths) to get them to their goals. That includes a path across the stage. This past spring, the 2020 graduates were invited to Gainesville for the ceremony, and Stephenson-Smith came with his parents and his sons.

The diploma is the epilogue of a story of inspiring persistence that likely makes him an effective Farm Bureau leader. And it has the signature of a dean who helped make it happen, to find the path, to achieve a dream. 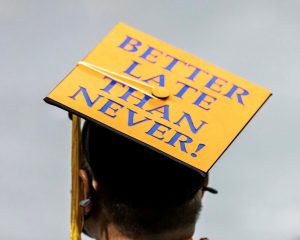