A lesson in loss and in hope

Cris Arellano Jr. loved Holly, and that’s why he helped his dad cut out her heart and lungs for lab testing. He did not want his heifer’s death to be in vain. He wanted to know what caused it, and, more importantly, he wanted other people to know.

He did it “so that other people won’t have to deal with this,” said the 13-year-old member of the Gadsden County 4-H Livestock Club and of the Junior Florida Cattlemen’s Association. Cris had just dealt with losing 11 of his 19 cows in three weeks.

The eighth-grader thought that maybe there’s a cure for his heartache in a cure for whatever killed Holly, Molly, Lilly, Benji, Emma and six others. He was able to look at what in life was a beloved animal and see it in death as a valuable lab specimen and to look to science for answers. 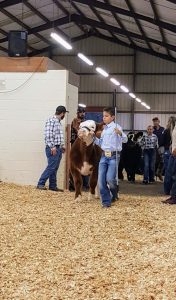 Cris Jr. has a great role model among the volunteer leaders of his 4-H club: His dad. Cris Arellano Sr. modeled how to perform in a crisis, taking time off from work to spend hour after hour in the pasture not giving up, trying remedy after failed remedy, lifting cows to the point of exhaustion, and acknowledging that he needed help and calling in scientists.

Evie was practically raised as an Extension agent, tagging along during her childhood years as her mother visited ranches.

Today, just a year into her career as an agent, it’s practically second nature for her to jump in the truck to visit ranchers in distress.

By visiting the pasture, Evie and Ann could see the noxious weed that vets could not see in the clinic. Ann identified the coral ardisia weed as a potential culprit and developed an action plan to test for its toxins.

There’s a strong link between coral ardisia and cattle deaths, but little follow-through on the toxicology. At the time I write this, the United States Department of Agriculture’s Poisonous Plant Laboratory in Utah had sent people to the Arellanos’ farm in Quincy to collect plants so they can analyze what coral ardisia does to animals and investigate possible antidotes.

Blount points out that more definitive answers are possible only because so many factors have aligned to support the search—sick cattle, obvious plant poisoning, and enough Extension and veterinary support to research it.

And there’s another crucial factor: A willingness by the owners to discover the cause. Cris Jr. shows great courage in publicly sharing his pain and loss.

And to privately share it. At the lowest point of the ordeal, when his father drooped with exhaustion, Cris Jr. put his arm over his dad’s shoulders and drew upon his favorite subject in school. History had taught him that whole empires fall. That made what had happened on their farm seem smaller. Son consoled father by telling him that together they’d build back the herd.

In fact, they’ve already begun. Just before Emma died, she gave birth. Cris Jr. midwifed the tiny heifer on January 18. He sees in the calf consolation for what he’s lost and a new partner for competitions yet to come. He named her Hope.