A recipe for economic development

A 50-year-old restaurant in Live Oak nearly closed because of one bad hour. For the first time she could ever recall, Marion Cason Gross failed an exam she needed to pass to keep cooking.

Katherine Allen sees it as her job to create—or in this case save—other jobs. She got to work getting Cason Gross back to work.

As a family and consumer sciences agent for the University of Florida Institute of Food and Agricultural Sciences Extension Suwannee County, Allen has led a communitywide effort to plan for its economic future. Her office also prepares people to pass certification tests to get or keep jobs. It’s her mission to keep Suwannee working. 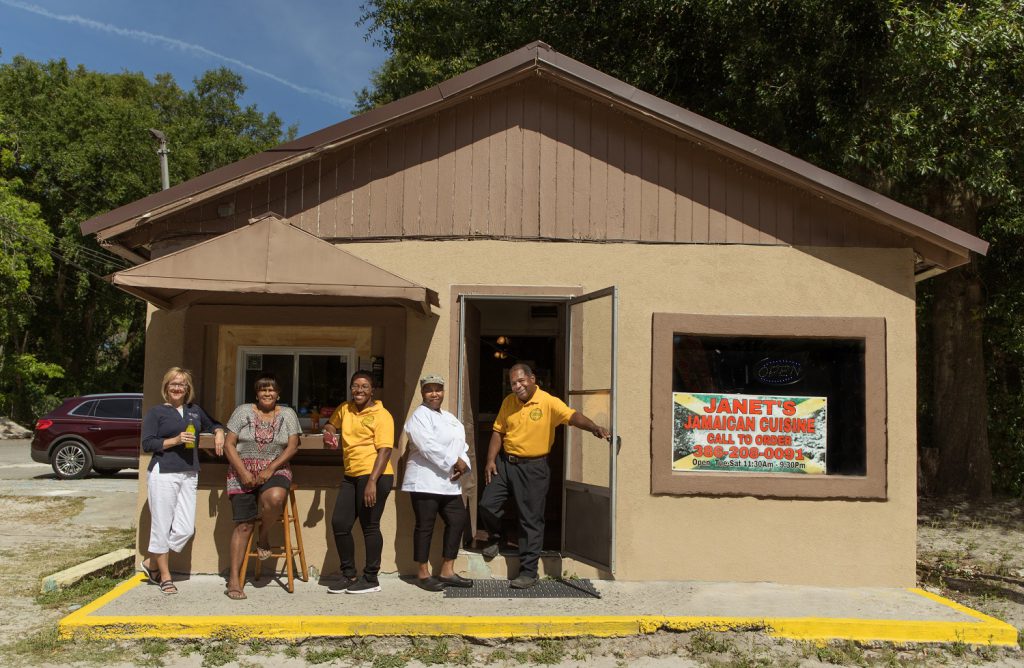 Closing Ms. D.’s Kozy Korner would mean another vacant storefront in a rural community that already had too many. In addition to losing her business, Cason Gross would lose her job, and so would the people who cooked, cleaned and served. It would also mean the vanishing of retirement income for the 73-year-old Cason Gross and the 91-year-old mother for whom she cares, Dorothy D. McMillian, the original Ms. D.

To pass the exam and avert this personal economic disaster, Cason Gross needed not just a study buddy but a motivational coach. Allen turned out to be both.

Allen did what UF/IFAS Extension does every day in every Florida county—assemble and share evidence-based information. Cason Gross, a third-generation restaurateur known as “Ms. Marion,” had used outdated library books to study. Allen knew exactly what Food and Drug Administration Food Code information Ms. Marion needed and invited her to the Extension office in downtown Live Oak.

Ms. Marion doubted herself, but Allen convinced her that passing the exam was a matter of putting in the hours of preparation. Ms. Marion heeded the advice. She made her own food safety flash cards and had her mother quiz her as they drove to doctor’s appointments.

On exam day, Ms. Marion had the jitters. Allen gave her a small gift. The keychain had a miniature dinner plate on it. It reminded Ms. Marion not only why she needed to pass but that someone cared that she passed the test.

A few days later, Allen called Ms. Marion with her passing score. They both shouted out loud. The restaurant would stay open.

That meant continued employment for Kerri Hart, who worked the takeout window. She lived with her mother Janet Myers in Live Oak. Janet is a talented cook, and the oxtail and curry chicken on the Ms. D.’s menu came from her kitchen.

Ms. Marion announced her retirement last year and her intention to sell. Kerri had an idea to keep it in Ms. D.’s family and to reunite her own.

Kerri’s father Steve Myers worked as a waiter at Disney World. It was good enough money that it had for 24 years kept him and Janet from taking the risk of opening their own Jamaican restaurant. There were already so many in Orlando. They had seen friends’ dreams dashed by failed restaurants. Certainly the middle of a pandemic was no time to launch a restaurant.

Ms. D.’s didn’t have the sparkle of Disney, nor the tourist traffic. But they could rent instead of buying, they wouldn’t have to invest in kitchen equipment, and no one else they knew of had a Jamaican restaurant in Suwannee County.

Steve quit waiting tables and moved back home, Janet moved out of her kitchen and into Ms. D.’s, and Kerri kept working the takeout window. Janet’s Jamaican Cuisine was born. Business is good enough that in the fall they hope to expand with outdoor dining and hire people—creating jobs—to wait on customers. Allen is now preparing Janet for the food safety exam.

Beyond creating jobs and buying local, a successful restaurant also gives its owner the capacity to support local charities or to simply express appreciation. Ms. Marion sent Allen a $20 bill. Tips, after all, are part of the restaurant economy.

Allen doesn’t work for tips. She works for taxpayers. She returned the gift.

For all the good that UF/IFAS Extension and public science do for a local economy, there’s some money that should never change hands.