Situation: Per the Centers for Disease Control, 48 million people get sick, 128,000 are hospitalized, and 3,000 die from foodborne illness in the United States each year. Foodborne illness can be prevented in many cases by practicing safe food handling habits. Extension agents and volunteers are tasked with keeping their clientele from developing foodborne illnesses when preparing and/or serving them food, such as in concessions, fundraisers, potluck-style dinners, summer camps, and lunch-and-learns. Agents/volunteers may lack knowledge on how to properly procure, prepare, and store food, and thus place themselves and their clientele at risk of foodborne illness. Due to the identified knowledge gap, Dr. Amy Simonne and Dale Pracht, FYCS and 4-H Specialists, respectively, developed the FCS/4-H Food Safety Collaboration across all five districts. Nine In-Service Training (IST) opportunities were offered to agents/key volunteers. The IST’s objectives were to equip agents/key volunteers with essential food safety knowledge, and help them identify the food safety training needs of their general volunteer base. Methods: The first session was held at Orange County Extension. Two FCS Agents co-taught a six-hour SafeStaff® class to a group of ten agents and five volunteers from various program areas including 4-H, Agriculture, Horticulture, FCS and the Master Gardener program. The IST included materials developed in-house (PowerPoint presentation and handouts), a case scenario, hands-on activities, and visuals. Results: Pre and posttests assessed knowledge gain. The average pretest score was 81% and the posttest score was 97%, a 16% gain in knowledge. Qualitative data showed that prior to the training, Agents expressed ambivalence and lack of understanding regarding the importance of these trainings. Afterwards, they shared that they understood the relevance and importance of training their volunteers in food safety. Conclusion: While agents/volunteers learned the essentials of food safety and how to identify knowledge gaps, many expressed interest in partnering with an FCS Agent to develop Food Safety training for their volunteers. 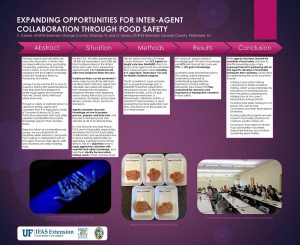