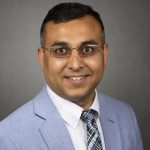 Nitrogen plays several important roles in plant health. It provides structural, genetic, and metabolic compounds, amino acids, and enzymes. It also contributes to photosynthetic activity. Nitrogen is the most important nutrient to apply because it directly impacts the yield of the crop. Current nitrogen recommendations depend on the desired yield and are modified by a soil test nitrate analysis before planting. Crops that provide a nitrogen benefit to the soil are recommended to be planted before corn in the crop rotation. Dr. Lakesh Sharma, Assistant Professor of Soil Fertility and Sustainable Agriculture, discussed sensor-based in-season nitrogen recommendations for the 2020 Virtual Ag BMP Summit.

Multiple approaches have been developed to identify the correct practices for nitrogen management. There are five main approaches:

When examining now different nitrogen rates affect yield, the relationship is an inverted parabola. The yield should increase steadily with increased nitrogen application until it reaches a plateau where the yield is maximized. If any irregularities are noticed (such as random yield drops with maximum nitrogen application), there may be an error with another aspect of the crop management. Although there is a clear point where the maximum yield is reached, this may not be the best choice for farmers. Depending on economic factors, the on-farm economic optimum fertilizer rate may not be the same as the maximum rate.

A research study conducted with potatoes in Maine resulted in a nitrogen rate calculator that took into account the region, organic matter, presence or lack of a cover crop, potato prices, and cost of nitrogen. Similar calculators are being developed for corn to determine the proper rate of nitrogen based on similar factors.

In addition to rate, the timing of application must be determined. During corn development, over 80% of nitrogen is utilized after the rapid growth stage begins. This means leaching or denitrification are risks if all nitrogen is applied at planting or during the early growth stage. To avoid this problem, split applications can be used when tissue tests show that the corn needs more nitrogen. However, these tests are impractical because the status of the corn is likely to change dramatically by the time the test results are returned (i.e. the window for fertilizer application is passed).

A new type of sensor is being developed to measure the nitrogen needs of corn on demand. This sensor scans the crop’s leaves to measure how much light is absorbed and how much is reflected. Of the visible light spectrum, blue and red are utilized for photosynthesis. The sensor can determine how much photosynthesis is occurring based on how much light is reflected instead of being utilized. The NDVI model mentioned previously is based on the information collected by the sensor.

This sensor, called the GreenSeeker, was developed at Oklahoma State University in the 1990’s. Researchers developed a sensor equipped with optic fibers to measure chlorophyll content. They detected chlorophyll within the same crop of bermudagrass to see if there was a nitrogen rate difference between plants. Then this research was repeated with wheat. The researchers examined changes in sensor readings with various growth stages, varieties, row spacing, and nitrogen rates. These sensor readings were determined to be highly accurate and commercially applicable.

Continued research developed the modern sensor, which measures red, red edge, and near infra-red wavelengths. The sensor projects an LED light onto the leaves, and the filters record the amount of each wavelength reflected. Healthy plants will reflect less light than unhealthy plants. A high reflection means less chlorophyll and less photosynthesis.

The GreenSeeker is most effective during the early to rapid growth stages because that is when most of the photosynthesis occurs. Once the plants are mature, sensor readings are almost the same across all rates of nitrogen application. As a result, the sensor should be used during the early growth stage to measure when the crops need another nitrogen application to fuel higher levels of photosynthesis.

After the sensor information is collected, an algorithm is used to find the necessary nitrogen rate for corn. Like the nitrogen calculator example mentioned earlier, this algorithm considers factors such as estimated yield, efficiency, and cost of nitrogen.

There are several applicable takeaways from this research. The first is that considering soil types, cultivation systems, and climate zones will improve nutrient recommendations. There are also many different types of sensors available, so a sensor should be chosen based on the crop. Lastly, the sensors are not as useful in the later stages of growth because the plants are fully developed and will reflect most of the red wavelength regardless of the amount of nitrogen available.

Q: Do you plan to make an end rate calculator for Florida cropping systems that include cover crops?

Q: With NDVI technology identifying nitrogen levels and need to supplement, how do you tease that data from other potential contributing factors, such as disease, pests, and drought. My understanding is that there is usually lots of noise in the data and it is very difficult to confirm the real causing factor.

A: This is a very important question. This is a question that is haunting scientists in Oklahoma as well. But you have to work with the tools you have, and so far this is the best possible way to improve nitrogen use efficiency. There are factors, as you mentioned, such as disease or pests that could impact your yield determination, but that could happen to any crop and anytime. To think about it, you have saved almost a month and a half of your crop, so you have taken out one and a half months of variability from your whole crop growth cycle. That’s a lot of time, and that time is basically the early period that’s responsible for germination issues and early diseases. If there is any disease that comes after a month and a half of crop growth the sensor does not take care of that, so if that’s happening then obviously that would impact the nitrogen.

Q: How much ground cover do you have to have of the crop of interest before you can start using the sensor?

A: Typically there is no guideline for that. In my experience, I have started using this sensor when the crop germinates, so the 2-leaf to 4-leaf stage. Some people have a question about it getting its data from soil cover, but it is also getting data from the high end plot as well. So you are basically getting the same situation for the high end plot and your normal field plot, which equalizes the situation and gives an error rate of zero.

Q: How do soil moisture conditions affect the reading on a sensor?

A: There are not a lot of publications on sensor readings impacted by soil moisture. It typically takes data from leaf cover or the leaf itself, so it’s the light that’s reflected back from the leaf. It is recommended that you do not use the sensor in the early morning because at that time there will be dew on the leaf and you can get a false replication from the water droplets. If you wait until about 9 or 10 in the morning, the droplets disappear and you will not have false or pseudo reflections from the water droplets.

Q: Back to the data, did you use a multivariate approach to tease out the data related to the organic matter and location differences in Maine?

A: Yes. You can use Google to find the SASS code, but I also took a course when I was a graduate student on multiple regression and analysis; you can also find a crash course if you go to YouTube. You take all of your sites and categorize them into your Excel spreadsheet, which means you give all of the information to the software – a column for organic matter, cultivation practices, region – the factors you think could impact your data. When you run the SASS it makes a grouping of your sites. The grouping comes from the software itself that calculates which sites are behaving the same; so this data belongs to this group of sites and that data belongs to another group of sites. And that depends on how much correlation you have between those sites that are grouped into the same category. It’s not that complicated, the word itself looks fancy, “multivariate analysis”, but believe me it’s not that complicated. You get the SASS code and put it in; SASS did it all for me. You have to interpret the data, which you can send to a statistician when you get the output, or you can send it to me when you get the data if you want me to analyze it, but I can certainly help you with that.

Q: I think some of the crowd might be thinking about applications in Florida beyond the crops you talked about. I’m thinking in particular of the ones in commercial horticulture where we grow on plastic mulch – sometimes its white, black, silver… is there any possibility of using this technique on a crop that’s got mulch underneath it?

A: Yes. So the soil color differs as you move from one region to another, and one location to another. The sensor takes care of those errors in there; engineers have developed sensors that normalize those errors. The question about other commercial crops – yes, there are applications of this technology across agriculture. The only factors you need to take into consideration are what crop you are choosing and what the foliage color could be. If you want a recommendation after 20 days of germination, at that time the crop will basically cover the ground, that means you’ll need more than one wavelength sensor to get a reading that is not saturated. This is because all the light that will go over the leaf foliage will be used by the foliage in the red region, and a very small amount of light will be reflected back. So you need a range of wavelengths that will be reflected back to the sensor in order to calculate the NDVI.

Q: You’re an extension specialist but you do have a research assignment, and as you look forward to the kind of research you want to get involved with, how much of what you talked about today is something that you would like to purse on the research side for Florida conditions and crops?

A: By training I’m a soil fertility recommendation specialist, and I have developed many recommendations for different states; I’m involved in research with many states even now. My first priority would be to develop recommendations for the crops that I am involved with, especially row crops and potatoes, but I can participate with other projects that work with other crops on how to use this technology. This is not an expensive technology; one NDVI sensor is around $400 for the farmer and they are pretty hardy so they will not break easily. I have used the same sensors for the last 10 years for multiple sites. I can help anybody that wants to work with this technology; how to use the data, when to take the readings, etc. If agents want to work with me I’d be happy to help them out. To develop an algorithm you probably need a sensor that could be used in the field, we call it a research standard sensor, and would be in the range of $3000-4000. If anyone is interested in going in that direction please let me know, and I’d be happy to help as much as I can.

Emily is the assistant director of communications for the Center for Land Use Efficiency. She communicates research and extension efforts and supports the Florida Master Gardener Volunteer program, Florida-Friendly Landscaping program, Program for Resource Efficient Communities, and Ag BMP programs. ...