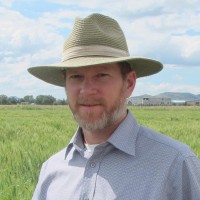 Dr. Michael Mulvaney, an assistant professor studying cropping systems at the UF/IFAS West Florida Research and Education Center, discussed the potential for nitrogen credits following peanut crops. In Florida, pre-plant soil nitrogen credits are not given. This is because the warm climate, frequent rainfall, and sandy soils cause soil organic nitrogen to cycle rapidly. Due to this, soil tests are likely to report inaccurate readings because nitrogen levels will change before the results are returned. However, we do recommend a nitrogen credit for peanut crops.

Extension services in Georgia, Alabama, Oklahoma, Virginia, and Florida claim that on average there is a 20-40 pounds N per acre nitrogen credit after peanut crops. This is a recommendation based on extension, not peer reviewed literature. One of the issues is that this nitrogen credit is promoted in a wide range of states, even though mineralization varies based on whether the state is warmer or cooler, residue management, and residue loads.

One common theory is that leaving peanut hay in the field can provide a source of nitrogen for incoming crops. However, four different studies found that peanut hay provides a negligible amount of nitrogen to subsequent crops. Because the nitrogen credit was so low, researchers noted that peanut hay cannot replace fertilizer application. They also suggested that extension professionals should no longer recommend reducing fertilizer rates following peanut harvest.

A study was conducted to discover whether planting wheat after a peanut cover crop would result in any nitrogen credits. This study was different from those previously mentioned because it included a fallow control to see if any resulting nitrogen was due to peanut residue or the presence of any organic matter. Results showed that peanut nitrogen credits to winter wheat are negligible under conservation tillage management in the Southeast U.S.

Nitrogen credit field research has several caveats. First, it is hard to detect nitrogen credits if they are only 10 or 20 pounds. Nitrogen treatments may also be too course. In addition, native soil nitrogen may obscure any nitrogen credits due to organic matter turnover. Because most people don’t have spreaders for distributing their peanut residues evenly over their plots, there can be substantial field variability with nitrogen credits. Perhaps conducting more repetitions of this experiment would result in a statistical difference.

One type of study that attempts to control all variables is the litterbag study, which consists of placing mesh bags filled with peanut residue in or on soil and then measuring nitrogen at various times. Litterbag studies generally underestimate N mineralization rates because they exclude macro- and meso-organisms, thereby increasing N mineralized during a subsequent crop season. Therefore, N credits from litterbags generally represent the most nitrogen that can possibly become available. These studies demonstrate that 30-50 percent of nitrogen is released during the first 30 days, when there is either no crop in the ground or little N uptake by a winter crop. This is important to note because the release rate needs to match crop demand. Substantial nitrogen uptake does not begin until after this period, which means that plants will not be absorbing the nitrogen during the 30-day window.

Litterbag studies have also shown that more residue leads to more nitrogen credits. A fall tillage plan provides about 30% nitrogen for the crop and a no-till management plan delivers approximately 40% nitrogen. As a result, nitrogen credits should be based on biomass. A no-till plan is the best practice because biomass sits on the soil surface and slowly releases N during subsequent crop uptake. This practice generally maximizes the amount of nitrogen that will be available for crops.

In the end, the peer-reviewed literature agrees that there is no significant nitrogen credit from peanut crops. Even if there is some nitrogen, it is much lower than extension recommendations suggest. Some fields may have more nitrogen after peanut crops due to residual nitrogen from undug pods or from leaf drop after digging. More research is needed to discover which conditions cause fluctuating nitrogen levels.

Watch the recording of his webinar.

Q: What research did the Extension recommendations come from?

A: Excellent question! I asked myself this same thing. This is what I keep coming back to – I think it was grandfathered in. I think it was probably some researcher 50-60 years ago who never really published the work, had it sitting in his drawer; back then we didn’t have peer-reviewed EDIS publications, and you could just kind of shoot from the hip. I don’t think that the rigorous science was really done; if you just look at corn vs peanut it’s going to look like a N credit after peanut because you have higher yield after peanut – but there was no control, so they didn’t know if the difference was due to N mineralized by peanut or N immobilized by corn residue. And it may have come from N recommendations in corn-soybean rotations, right? But those corn-soybean rotations were done in the north; it’s a completely different system down here. So, maybe you’re getting N credits up in the north and they just assumed that it would transfer down here. I kind of think that’s what’s going on here.

Another reason for the discrepancy is because it depends on how you define N credit. A lot of people, and you’ll find this in the literature, define a N credit as the amount of N that you’d have to increase on a corn-corn rotation to produce the same yield in a soybean-corn production. And if you define it like that, that leads to a fundamental misunderstanding of the role of immobilization in the nutrient cycling process. If I have to apply 20-40 more lbs of N to a corn-crop vs a soybean-corn crop, that’s assuming that the N is coming from the soybean and it makes no acknowledgment of N immobilization from that first corn residue. So, if you define it that way then people are going to automatically assume that N credits come from legumes and that it totally ignores immobilization. Glenn Harris at UGA came close to acknowledging that, because he says if following grain sorghum or cotton, increase your N by 20-40 lbs – that’s pretty interesting. So, to me, that’s the only Extension recommendation I’ve seen that comes close acknowledging immobilization in this process.

Q: What is N mineralization?

A: Researchers have studied the potential percentage of pods that can be lost at digging and estimated that pod loss is at 8-40%.

Q: What form is the N in when it mineralizes, is it nitrate or ammonium?

A: Generally, the N cycling process first converts organic N to ammonium, and ammonium can quickly convert to nitrate in an aerobic environment. The plant doesn’t care though – it can take up both forms. Of course, nitrate leaching can be a loss pathway, but so can ammonia volatilization. The nitrogen cycle is a leaky system.

Q: Has anyone looked at microbial uptake of N compared to availability to crops post peanut?

A: So far, have we discussed N uptake… This is where we need 15N labeling studies. That would provide us with a lot of useful information, because then you could track the amount of N that went from peanut to a subsequent crop – you could just quantify it and it’d be hands down, done. It’s a lot easier said than done though because you can’t soil apply the 15N because it may not have come from the peanut, it may have come from the residue. So now I have to individually spray leaves with 15N labeled urea, and I have to make sure I’m not going to get any on the ground. And then you have to assume how much of that N is going to get repartitioned to the pods instead of the leaves… I’ve given that question a lot of thought and I’ve written some proposals on it… The answer to your question is yes, labeling studies have been done. There was a study done in SE Asia and the statistics just were not very rigorous. There have been 2 or 3 N15 labeling studies on peanut and results have been inconclusive.

Q: What about N contribution from cover crops to a subsequent crop?

Q: If I understood you correctly, it kind of sounds like you said earlier that the information on N credit after peanut… I mean maybe it’s a difference in the environment – it seems like there’s less availability down in the south on these soils than there would be on heavier soil further up north… is that a correct takeaway?

A: I do think it’s environmental. It’s hard to have a blanket statement like that because it depends on if the nitrogen credit applies to a winter or spring crop and how the peanut residue is managed. Generally, though, N is mineralized faster in the south compared to the north because it’s warmer. The soil types may be another confounding factor. We sample to a 6-inch depth and I’m coming out with sandy-loams or loamy-sands. But then you go down another 6 inches and you’re hitting much more fine textured soils with higher CEC’s and they’re able to store or hold on to that N a lot better. So, sampling 6 inches to get our soil textures is misleading because the roots are going down much further; a taproot for a cotton plant may go down 18 inches and it’s accessing a lot more N that may be stored in those deeper, finer textured layers that we’re not picking up on in those top 6 inches. I feel like it may be appropriate to give ourselves a N credit if we could sample down to 12-18 inches. The problem is, you just can’t do that in any practical sense.