The most critical animal category in Florida cow-calf operations is the yearling heifer. In 2018, Florida had a cattle inventory of 1.6 million head, and from these, approximately 900,000 were beef cows, mostly crossbreeds. Every year, approximately 20% of the State’s cow breeding herd is replaced by yearling heifers. To incorporate heifers into the breeding herd, they need to attain puberty before the beginning of the breeding season.  However, it is challenging to monitor reproductive development and performance of yearling heifers. As a consequence, producers typically invest time and financial resources in heifer development, only to find out at the end of the breeding season that a proportion of them remained not pregnant (“open”). Open heifers will be culled or maintained for another year before they produce a calf. Since 2018 we have monitored reproductive development and performance of yearling heifers in Florida and in 2020, we launched the “Know Your Heifer” extension program. We were able to establish a statewide system to generate, analyze and report information on the reproductive potential and performance of replacement beef heifers. During the program, producers and County Agricultural Agents were educated about heifer development and reproductive management, and were connected with State Specialists, such as Drs. Binelli, Gonella-Diaza, Moriel and Bittar on beef topics. We enrolled more than 3,000 heifers in 34 cow-calf operations that spanned 15 counties across Florida. Here we report a summary of our findings (Table 1). The main purpose is to provide benchmarks to producers, so that they may gauge the performance of heifers on their ranches in comparison to other ranches in the state. Identity of individual operations were kept anonymous.

-length of the breeding season varied from 59 to 119 days;

-synchronization protocols were based on MGA or a CIDR;

-service was by bull only or AI followed by bull;

-heifers were culled and did not enter the breeding season if they were scored RTS 1 (Cull 1), RTS 1 or RTS 2 (Cull 1-2) or not culled regardless of RTS (Non cull);

-pregnancy detected 30 days after the beginning of the breeding season ranged from 20.1 to 50%; and, 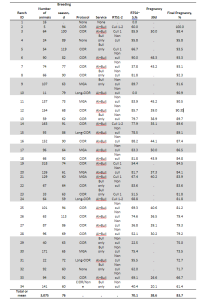 The classification of heifers according to the RTS prior to the breeding season is represented on Figure 1. While 70% of heifers were considered mature (RTS 4 or 5), 16.5% were immature (RTS 1 or 2) and 13.5% were approaching maturity (RTS 3).

Pregnancy rates measured 30 days after the end of the breeding season captured the overall reproductive performance according to the RTS measured prior to the breeding season (Figure 3).  Again, there was a gradual increase in overall pregnancy success according to RTS. While pregnancy success of immature heifers (RTS 1) was only 54.1%, mature heifers rated almost 90% (RTS 5). 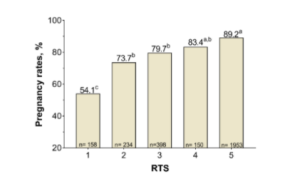 Figure 3. Effect of the Reproductive Tract Score (RTS) on pregnancy rates measured 30 days after the end of the breeding season.

The take-home points are very clear: the mature yearling heifers will present an outstanding reproductive performance and will integrate well with the breeding herd as replacements. In contrast, immature heifers will deliver poor reproductive outcomes, either remaining open or calving late in the season. In the short-term, early detection of reproductive maturity via RTS allows producers to make immediate management decisions about the fate of individual yearling heifers: should she remain in the herd as a replacement heifer or not? In the long-term, reproductive maturity and reproductive performance measurements will help producers to set goals and monitor progress towards greater efficiency and sustainability of their operations.

Please check our website for more information. The “Know Your Heifer Program” is supported by the University of Florida / IFAS Extension Office.