Zach Holmes graduated with a BS in WEC this Spring. He had an active undergraduate career, outlined

below, and was awarded the WEC department’s “Outstanding Professional Promise” award.

What did you do while you were an undergrad here?

As an undergrad, so, my major is in Wildlife Ecology, and my minor is in Environmental horticulture.
For two semesters I’ve actually been a TA, and I’ve also been the president of GREBE for the past year, which is Gators Ready for Exceptional Birding Experiences. It’s a birding club that was founded two and a half years ago now, so that’s propelled me and offered me a lot of opportunities in meeting other people about birds.

I also volunteered on a variety of PhD projects, I volunteered with FWRI, Ocala National Forest, FWC, Audubon…

What is environmental horticulture?

Environmental horticulture is actually in the plant sciences department, mainly stationed over at Fifield Hall. I was just a TA for environmental plant ID, which is one of the options students can take as one of their plant classes.
So as a TA it was my job to lead my group of students around and teach them how to identify plants.

That was my minor, so I took a few other classes like ecosystem restoration, arboriculture, plant ID, Annuals and Perennials, and I think my last one was Landscape Design.

Did you focus primarily on birds with your studies within the Wildlife major?

I found my niche with birds on the first field trip in Dr. Steve Johnson’s Wildlife of Florida class. It was my first semester in college, and we went to Merritt Island.

That was my first birding trip, and from then on I just kind of, liked birds! So I went after it.

When did you know you were interested in wildlife? Do you have an origin story?

Yeah, a little bit. I always knew I liked animals. That was the dream. Originally I was just going to do the zoo program at Santa Fe, but the wait time for the program was like a year and a half, so I started exploring my options in Gainesville and realized that I didn’t want to work in captive settings anyways. Not that they don’t have their perks, but my interest in doing conservation developed during my first semester doing my AA at Santa Fe.

Then I transferred over to UF, and the rest was history!

I was born in Indiana, and then, when I was really young, my parents moved down to the Deltona area, which is halfway between Daytona Beach and Orlando, so Volusia County.

You were the second president of GREBE. What was that like?
My big focus this year was trying to expand our influence, and the number of people that really know who we are, that we’re here, and that we’re not going away.

It’s not a single year situation. I know there’ve been several clubs like that, so I’m trying to make sure that we’re permanent.

A lot of what we did was networking, really. Just getting our name out there. We’ve done quite a few tabling events, and then we’ve exclusively worked with Audubon of Florida and the Alachua Audubon Society. We’ve done a lot of projects with them, including their Backyard Birding tour, and we’ve also recently helped out with a CLI event, which stands for Conservation Leadership Initiative. It’s Florida Audubon’s way of trying to get younger individuals involved in Audubon.

That was a really big event for us. We had about forty people in total, between students from here, all across north central Florida, and all the way from UCF to FSU.

About 6 different chapters of Audubon participated as well, so that was exciting!

We’ve done other things as well. We partnered with the Florida Ornithological Society, helping to plan their yearly meetings, we’ve done tours with the Florida Museum of Natural History. We tabled at their butterfly event. We did a lot of events just to get our name out there.

Right now I’m still on a cassowary high. Southern cassowary, from when I saw them in Australia with Steve Johnson. 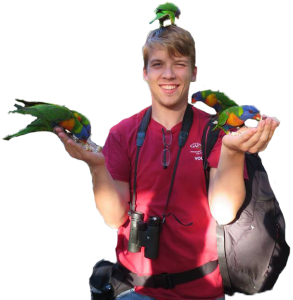 How was studying abroad in Australia?

I’d been to islands in the Caribbean on vacations with my family and stuff, but Australia was probably my first true international experience. I was there for a month and a half. The study abroad program was just three weeks in the tropics of Northeastern Queensland, which was incredible. I will always want to go back!

Then, for about two weeks, I traveled down the East coast with Mackenzie Dorr, who is the new GREBE president!

We visited all the main cities, and went all the way down to Tasmania. It was something I’ll never forget.

I saw 224 bird species while I was there, almost all lifers!

This summer I got a position with a PhD candidate named Kristen Malone, who works with Dr. Katie Sieving, and she is working with Bachman’s Sparrows. We’re looking at predator-prey dynamics, and how this nongame species is responding to the heavy management they do for bobwhite quail.

My main responsibilities will be catching, banding, and doing mark-resigh

t sampling with the Bachman’s Sparrows. I will also be doing avian predator transects looking for owls and hawks within two different properties. That’ll last until the end of August, then we’ll see what happens!

This is the most annoying question to anyone who is graduating, but what do you want to do long term?
Long term? That’s actually kind of easy for me!

I want to go back, maybe not here, but somewhere (not that I’d mind here, hint hint professors!). Grad school is definitely on the horizon for me.

My goal is to contribute to avian conservation, and I have really liked teaching in the classes I TA’d, so I could see myself being a professor somewhere, having my own lab and doing research. 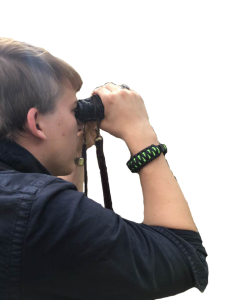 Anything else you want to say?
Go birds!