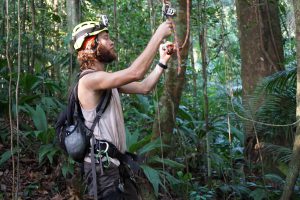 “I think the most exhilarating moments are pulling off epic moves trying to catch frogs, which are almost too far away. Hanging off vines upside down, gripping a plastic bag in my mouth (for the frog to go in), and catching a rare frog one-handed, all while safely secured to my rope and harness of course!” Edmund Basham excitedly describes some of his most memorable experiences while conducting field work in Panama over the past few years. “It’s absolutely what I was put on this planet to do.”

Basham is currently a doctoral student in the department of wildlife ecology and conservation at the University of Florida under the advisement of Dr. Brett Scheffers. He is studying frogs in the tropical rainforest and examining how they climb up and down trees in response to variations in climate. Basham has also focused on assessing the habits and behavior of one unique poison frog species.

Beyond getting published and communicating his research findings, Basham said that the best way to connect with others about his discoveries, field experience, and enthusiasm for the natural world is through the medium of video. He filmed his experiences in the field and recently edited the compiled footage into an informative video about his research and field work in Panama.

“The color, smell, and feeling of the research is so rich, showing it on video adds so much to the results and dissemination of what we do,” said Basham. “You can’t tell someone that you found a frog in a bromeliad 30 meters up a giant tree and expect them to visualize it in the way that it really happened.”

In addition to using visual storytelling as a way to educate the public and immerse others in the intricate details, creatures, and energy of Panama, he also seeks to inspire and motivate others to protect the natural world.

“Any way that I can spur people to think about the natural environment and the ways in which we are impacting it, such as through climate change or deforestation, I think is of great importance,” Basham commented. “People won’t act to save something they have no idea exists!”

How His Story Began

While now based in a small town in Essex, Basham grew up in the countryside on the southeast coast of England. His mother loves to travel on her canal houseboat and visit wild locations, and his father is a forester and carpenter. Growing up in a rural environment, Basham said his parents were nature-loving and pragmatic, keeping a home free of electronics and new technology. As a result, Basham and his older brother explored the landscape, roaming through the fields and climbing trees.

“It has always been there, I’ve never really considered doing anything else,” Basham said about his love for ecology. “My Saturday jobs were all working with my dad hefting wood around a forest or the like. People always said, ‘What do you like doing? Work towards doing that thing!’ For me that was always just being in nature.”

He received his bachelor’s and master’s degrees in environmental science from the University of Sheffield. While attending university, Basham met Dr. David Edwards, who provided him with the opportunity to research amphibian recovery in secondary forests in Colombia. After obtaining his master’s, Basham saw an advertisement for a project that Brett Scheffers was running in Madagascar. Scheffers was looking for a research assistant to catch frogs and climb trees. Basham won the position, and Scheffers later asked him if he was interested in continuing this type of field work for a Ph.D.

“That was too golden an opportunity to believe,” Basham said.

Doctoral Work at University of Florida

In a broad sense, Basham is seeking to understand the patterns of verticality within forests and how the overarching rules of vertical structure can apply to forests around the world. To do this, Basham is studying frogs that live within the tropical forest tree canopy.

Through his research, he seeks to discover the heights at which the frogs live, why they move up and down the trees, and whether or not frogs living on the ground behave differently than the ones living in the canopy. By searching for patterns in data to answer these questions, Basham will fill in the missing information in current research that only surveys and captures species near the ground. Basham seeks to apply the answers he uncovers about the frogs to other animals in the canopy. Furthermore, he said he would like to use these research conclusions to predict how climate change can reshape the vertical structure and distribution of species in the forest.

Basham has been conducting field work in Panama since the summer of 2017; he has traveled there twice a year since that time, totaling five visits that accumulate to approximately 14 months of work. In his last year, his research has focused on the yellow-bellied poison frog (Andinobates fulguritus). He is focusing on how the frog’s habitat distribution may limit its movement and how its vertical movements and lifestyle impact its toxicity and defense capabilities.

Basham’s research uncovered differences in how the ground species of frogs and canopy species of frogs organize and move. Many arboreal species gather near certain trees that offer optimum habitat. A lot of the varying species climb down from the tree canopy and live closer to the ground during the dry season because the canopy becomes increasingly dry and arid during that time period, according to Basham. However, a number of species are resilient enough to remain in the canopy, while others “estivate,” entering a dormant state and hiding away until the rain returns. The yellow-bellied poison frog, in particular, had the most extreme migration of all the species Basham observed, traveling down about 30 meters from the tree canopy and residing in the roots of their “home tree” during dry months.

“We found that they only live on the biggest trees that have branches covered in vegetation,” Basham explained. “It’s these plants growing on the branches that can hold water, and the frogs put their tadpoles in them as a nursery.”

In fact, since Basham took photographs of these frogs over several years, he was able to differentiate some of them by their patterns and was able to recognize individual frogs he had seen year after year, moving up and down the same “home tree.” Basham also discovered that the toxins in the poison frogs change from the wet season to the dry season. This alteration indicates that the frogs’ diets differ between the canopy and the ground habitats.

A common misconception is that tropical forests do not have seasons and are hot and humid year-round. Yet, tropical forests do have seasonal climates, particularly in rainfall, and climate change is expected to prolong and strengthen dry seasons throughout the tropics, according to the IPCC (International Panel on Climate Change). When this happens, canopy frogs will be forced to live for longer periods on the ground.

“This puts more pressure on them because they need moisture and above-ground habitats to reproduce and maintain healthy populations,” Basham explained. “Think of it as a big hand laying on top of the forest and squeezing it down, more animals get pushed together near the ground, which means more competition, more disease, and more stress.”

In the next year, Basham will further evaluate his data and write peer-reviewed articles for journal publication. He will be defending his thesis and graduating in Fall 2020.