On September 28, doctoral candidate Nia Haynes presented an exit seminar for her dissertation, a project exploring the underrepresentation of minorities in conservation and natural resource (CNR) careers. Ms. Haynes is advised by Dr. Susan Jacobson in the Wildlife Ecology and Conservation department at the University of Florida, where she studies human dimensions of wildlife ecology. She has also been very active in promoting diversity in natural resources throughout her time at UF, as one of the founding members of UF’s Natural Resource Diversity Initiative (NRDI). NRDI is a graduate student-led organization that promotes diversity in the field of natural resources by connecting students from diverse ethnic and racial backgrounds with opportunities to advance in this field. 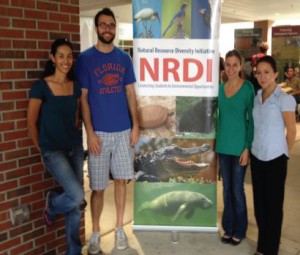 The focus of Ms. Haynes’s thesis was assessing the barriers minorities face when entering careers in conservation and natural resources. This fits into the framework of social cognitive career theory, a theory that seeks to explain how people develop interests in and make choices about their own careers. Social cognitive career (SCC) theory links an individual’s traits and experiences to their self-efficacy expectations and goals, and further on to career choices.

Nia’s thesis specifically targets the part of this theory that deals with how a person’s ethnic or racial background affects the choice to pursue a natural resources career versus other careers. In the language of the SCC theory, she seeks to quantify the connection between race and the variables of self-efficacy expectations and outcome expectations. Self-efficacy expectations are a person’s beliefs about whether or not they can achieve something, and outcome expectations are a person’s beliefs about what is likely to result from a given choice. Toward this goal, Ms. Haynes gathered data in the form of surveys, focus groups, and interviews on students’ perceptions of CNR careers.

Nia’s first study consisted of interviews of minority CNR and non-CNR students, focusing on what they perceived about CNR careers. The students who had chosen an academic path in natural resources were more likely to respond that careers in this field were an opportunity to do good in the world, while students in other fields were more likely to respond that these types of jobs were “not a real job.” However, both groups commonly responded that pay was likely to be low for CNR jobs. 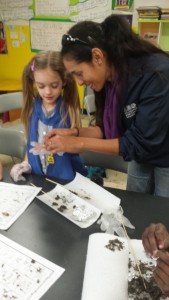 The second study looked at three different internship programs aimed at minority students in CNR fields, particularly differences in self-perception before and after the internship experience. The three programs were the Career Discovery Internship Program (CDIP), Leaders in Environmental Action for the Future (LEAF), and the Doris Duke Conservation Scholars Program (DDCSP). One of the main benefits of these programs seemed to be the increased knowledge students had of potential jobs in the field. Students were also more likely to have a good opinion of stability and pay in CNR jobs following their internship experience than before. This study also asked staff members about the challenges and benefits of their programs. The main challenges identified were the difficulty of tracking and following up with students after completion of the program, as well as determining how best to reach more young people.

Nia’s final study was a survey asking college students in an introductory ecology course about future careers and perceived discrimination in these careers. This study showed some differences in students according to age, comparing freshman and sophomore students to junior and senior students. The older students had higher scores for self-efficacy, meaning that they were more confident in their own abilities to succeed at the goal of pursuing a career in CNR. The survey also revealed that white students were significantly more likely to have been exposed to nature as children, and are probably more likely to value conservation as beneficial to society as a result.

In summary, these studies show that one of the main barriers to minority participation in CNR careers is a lack of exposure to these careers, and often a lack of exposure to nature in general. Internship programs such as CDIP, LEAF, and DDCSP are important tools for increasing knowledge of careers and majors in conservation and natural resources, as well as a system of networking and mentorship. Effort should be made to increase exposure, but in a way that is sensitive to what is important to the target community or group.