Wakulla’s Owls Are Boisterous After Sundown

Summer’s warm nights in Wakulla County are raucous and noisy, especially in the untamed forested expanses. The decibel level reaches well above 100 as the residents engage in conversations and social activity at an ear splitting volume.

Frogs of all sizes and octaves, buzzing locust, and other insects loudly stake out their territory, seek mates, and proclaim their existence as the sun fades in the west. None in the nightly chorus is muted or reserved in their declarations.

A select group of night birds add to the cacophony with unique performances intended to stand out from the pulsating background of buzzing, clicking, croaking and peeping. Most distinctive among these nocturnal performers is the barred owl, Strix varia.

This native owl is also known as a hoot owl and populates the county’s woods and suburban areas. It is one of about 220 species in the order Strigiformes worldwide which occupy every continent except Antarctica.

Owls are divided into two families, the true owls (Strigidae) and barn owls (Tytonidae). Both occupy Wakulla County, but the true owls are most common. These include the screech owl, great horned owl along with the frequently heard barred owl.

The barred owl populates most of the United States and Canada, but is quite common in the southeastern U.S. It is close in appearance to the spotted owl of the Pacific northwest, which has spots rather than streaks down the underside of the body.

Barred owl adults may stand over two feet tall with a wingspan reach of over four feet. With feathers designed for silent flight, it can flash suddenly and without warning from the inky recesses of night.

Despite the large appearance, the mature birds weigh one to two and a half pounds. The pale face with dark rings around the piercing brown eyes has a spectral appearance, especially when unexpectedly encountered in the dark.

Barred owls are carnivore and use two specific tactics for hunting. They still hunt from a lofty perch and cruise hoping to ambush unaware prey.

These opportunist predators will patiently watch for an unsuspecting animal to break cover, and then hurtle silently down to impale it with talons. The meal-to-be can be taken to a nest with chicks for sharing or just consumed on a high limb.

With their sharp vision and excellent night sight, these owls will sometimes cruise below tree canopies seeking to surprise a small animal foraging nocturnally. Either technique usually results in a meal for the barred owls. 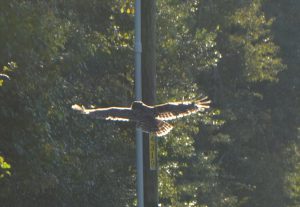 Human encounters with these owls are usually limited to hearing the distinctive call. It is most commonly heard at night, but barred owls are active at dawn and dusk.

The usual call is a series of eight accented hoots. The ending has a downward pitched “oo-aw”.

Sometimes several barred owls will assemble and hoot together. The effort quickly deteriorates into a riotous contest where the calls resemble excited chimpanzees each attempting to outdo the other.

The barred owls add to the reputation and character of Wakulla County’s wild night life. It is always a hot time with Wakulla’s boisterous owl population when the sun is down and spirits are up.

To learn more about owls in Wakulla County, visit the UF/IFAS Wakulla County website at https://blogs.ifas.ufl.edu/wakullaco or call 850-926-3931.