“Murder Hornet”: What’s all the buzz?

People, news media outlets, and social media are buzzing about the “murder hornet”. These stinging insects have not been found in Florida. The detection of this new insect is unnerving to both beekeepers and Floridians. With this gain in popularity it is important to know and understand the facts about this new insect.

Scientists and beekeepers do not use the name “murder hornet”. The proper name is Asian giant hornet (Vespa mandarinia). The first colony discovered outside of Asia was found in British Columbia, Canada in September of 2019. The hornet’s first appearance in the United States was Blaine, Washington 2019.

Asian giant hornets are native to Japan and can be found all across Asia. The hornets are social insects and maintain underground nests. Nests make up colonies of one queen and multiple workers. Nests are made in holes, trees, and the dead roots of trees making them challenging to find.

Asia giant hornets are predatory insects. Diets consist of a variety of arthropods (beetles, spiders, and caterpillars). Honeybees are also on the hornet’s menu. Honeybee hives cannot defend themselves against the hornet and offer a bounty of food and are full of protein. This causes great concern for beekeepers and farmers. Honeybees play a significant role in our agricultural industry as pollinators for many of our nation’s crops.

Generally, hornets are not interested in humans, pets, or large animals. However, if threatened or if nests are disturbed they can attack.

Scientists have not link the Asian giant hornet to any known ecological impacts.

The Asian giant hornet has an orange/yellow head with prominent eyes and a black and yellow stripped abdomen. Approximately 1.5-2 inches in length. While the Asian giant hornet is much larger in size there are other bees and wasps that could be easily mistaken. These include, but are not limited to, the European hornet, giant ground hornet, yellowjackets and other hornets. 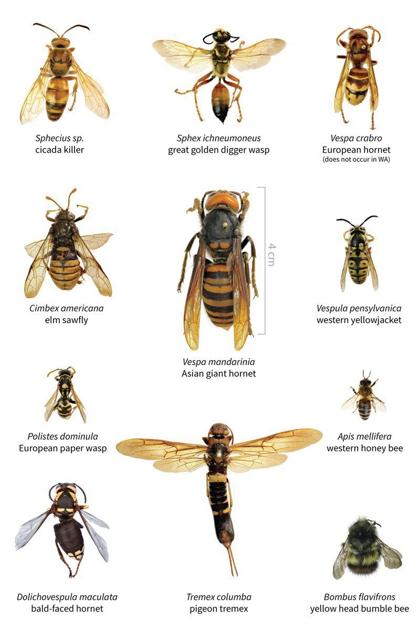 What should you do if you suspect they saw the Asian giant hornet in Florida?

While it is unlikely, if you think you have come across an insect that resembles the Asian giant hornet please post your concerns to DPIHelpline@FDACS.gov with the location, photos, and a description of the insect.