Laura Reynolds knew from a very early age that she was destined to be a scientist of some sort.

“I had great teachers that made science fun and interesting,” Reynolds said. “My favorite classes were always science classes in middle and high school.”

This interest carried on into college, where she always seemed to be better in her science courses and began to seek out science opportunities outside of the classroom. 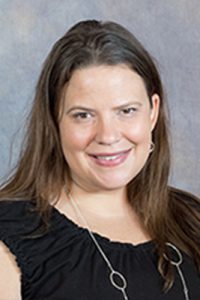 Reynold’s mere interest in science as a child, evolved into a passion for her to figure out how the Earth’s oceans work.

Following that passion, Dr. Laura Reynolds has joined the Soil and Water Sciences Department here at UF as a new Assistant Professor of Coastal Ecology.

“I get to ask a lot of questions and seek answers which will have implications on our environment,” Reynolds said when asked about her day-to-day tasks in her new position.

“I’ve only been here two months, but I’m most excited about the setup of where UF is (geographically) in the state,” Reynolds said. “It sets up some really interesting questions and provides different environments to ask these questions in.”

Reynolds mentioned that she is equally excited to work for a university under the Land Grant Mission, where she is given the task of using science to solve environmental problems.

When asked what she believed to be the biggest challenge to Florida’s coastal ecosystems, she simply could not list just one.

“There are so many issues and changes to see in my life, not to mention the lives of my students,” Reynolds said. “Number one probably being sea level rise.”

Reynolds explained how there isn’t much topography in Florida, which makes it really vulnerable to sea level rise, especially living shorelines.

The second challenge to Florida’s coastal ecosystems that Reynolds mentioned was changes in temperature.

“Temperature change is not only an environmental stressor but also a stressor on Florida’s economy in general because it greatly impacts Florida’s coral communities,” Reynolds said. “Coral is a significant area of tourism for the state.”

But what can Floridians do to help preserve our state’s coasts?

“Being aware of the issues and getting involved is most important,” Reynolds said. “But of course it is also important to try to generate less trash, have a smaller environmental footprint, and use less energy and plastic.”

Reynolds is highly motivated and excited about her new adventure here at UF. She says she is driven most by three things:

There are so many exciting things getting set up in the Coastal Ecology lab in the Soil and Water Sciences Department, according to Reynolds. She is currently planning her lab and recruiting undergraduate and graduate students as we speak.

SWS is excited to have Dr. Reynolds on board!