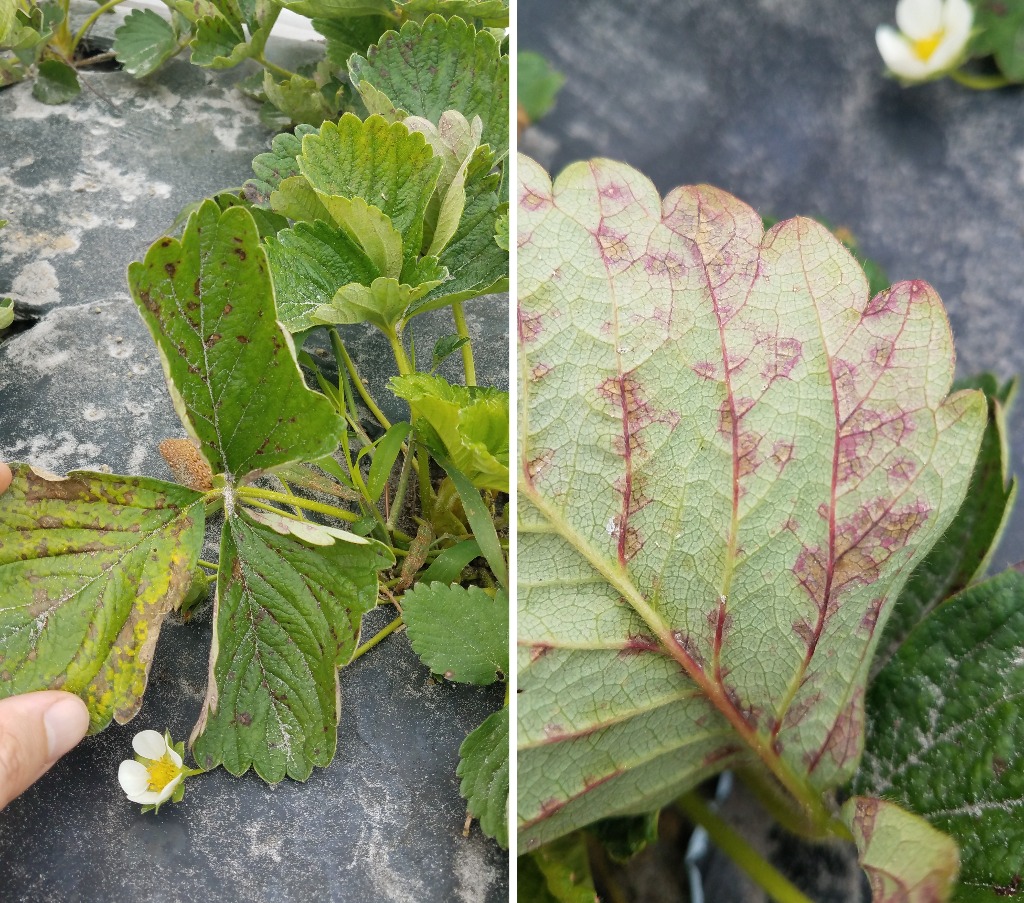 I visited an organic strawberry grower the other day who was worried about a rapidly expanding disease in part of her field containing the Camarosa variety. The symptoms were what you see before you: leaf spots constrained within the leaf veins with brown centers and dark outer edges; yellowing and necrotic tissue; blushing along the veins on the underside of the plant. The white specks you see are sand particles kicked up by the wind. The crown and roots were healthy inside. So what’s attacking the plant? One possibility was angular leaf spot – a bacterial disease – due to the constrained spots, though the blushing was still a curiosity.

We decided to send a sample to the Plant Pathology Laboratory at the Gulf Coast Research and Education Center outside of Plant City, and the results came back positive…for powdery mildew. Powdery. Mildew. Though the plants showed no sign of the classic white mycellium from which the mildew gets its name, the lab had found a positive result for the test. Per the lab: “Some strawberry cultivars (e.g., Camarosa and Camino Real) react very strongly to powdery mildew. Colonized areas on the leaves turn purple at first and then brown.”

Why is this so important? Powdery mildew is caused by a fungus while angular leaf spot is caused by a bacteria, and the two have different treatments for suppression. In organic production, a grower would apply copper to angular leaf spot. Powdery mildew doesn’t care that you sprayed copper, and now you’re out whatever you paid for the copper and the disease is still spreading. What powdery mildew fears is sulfur and biologicals labeled for powdery mildew like Actinovate, Cease, Serenade, and Sonata. Regalia, an extract from giant knotweed, is also a promising organic option. Proper disease testing ensures that you attack the right disease with the right method and don’t waste money or cause undue environmental damage while your crop continues to deteriorate.