The University of Florida has a specific team of researchers that are devoted to improving forages for Florida livestock. Bermudagrass is the most commonly planted forage species in the Southeastern US, covering at least 30 million acres. It is a warm-season perennial grass with higher protein and total digestible nutrient concentrations than bahiagrass, however it does require consistent fertilization with nearly double the nitrogen requirement that offers higher nutritional value than most other warm-season perennials. The newest development is a bermudagrass variety known as ‘Mislevy’ (which rhymes with ‘Chevy’, for pronunciation purposes). It was developed and cultivated by Dr. Paul Mislevy in 2000/2001 and intense research over the past couple decades has shown that it has great potential for early-spring forage production. Studies reported by Drs. Vendramini, Dubeux, and Rios (Mislevy-Bermudagrass published in The Florida Cattleman and Livestock Journal in December 2019) indicate that ‘Mislevy’ performs 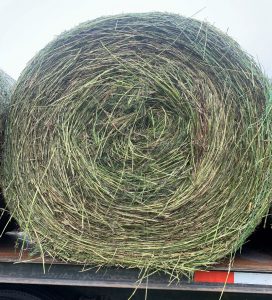 quite similarly to ‘Jiggs’ bermudagrass in terms of annual herbage accumulation and nutritional value. Like the Jiggs, it is well adapted to poorly drained soils. Structurally, it has thinner stems than ‘Tifton 85’ and will dry faster in the field when baling for hay.

Dr. Mussoline coordinated an effort with Dr. Marcelo Wallau and two local hay producers to transplant new forage material in the TCAA. One acre of ‘Mislevy’ was harvested from Gainseville on July 1, 2020 and transplanted within the TCAA for access to local hay producers. The acre yielded a little more than six 54-inch round bales that were spread over approximately six tilled acres for re-establishment. Upon establishment, cuttings will be made available to interested growers in the area. Additionally, one acre of limpograss (0.5-acre plot of ‘Gibtuck’ yielding 5 bales and 0.5-acre plot of ‘Kenhy’ yielding 4.5 bales) was harvested and transplanted within the TCAA. Limpograss grows well on flatwood 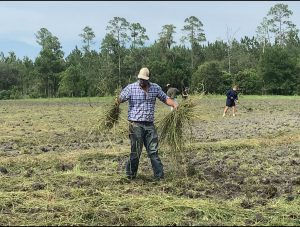 Both of these forages are planted using sprigs rather than seed. In order to transfer the material, a relatively mature stand of grass should be mowed and baled while it is still wet. The bales should be transported and immediately (i.e. same day) unrolled and spread onto ground that has been tilled and prepared as a seedbed. It is anticipated that these plantings will be established and available for other producers that may want to obtain material for their own pastures by Summer 2021.