There are several markets for cattle, however, one approach is to take them to a stockyard and auction them off for the “going rate.” It is difficult to define the “going rate” since that depends on the several variables including the weight of the animal, the apparent health and age, the breed type, the color, and most importantly, the need of the bidders at the auction. I had the opportunity to spend a day with Arthur Smith, FDACS District 3 Livestock Specialist, while he was inspecting the cattle delivered to the Ocala Stockyard. The Ocala Stockyard (located at 9100 County Road 25A) hosts one of eight livestock auctions located throughout the State of Florida and the Ocala cattle auction is held every Monday. Other stockyard locations include Arcadia, Ellisville, Lake City, Lakeland, Madison, Okeechobee, and Webster.

The cattle started streaming into the Ocala Stockyard around 8:00 AM and were checked in, inspected and separated into different categories namely bull, steer, heifer, or cow. They were also separated into slaughter or feeder supply. Feeder cattle (also known as yearlings) are weaned calves that are generally less than a year old. If a cow comes in with her calf, they are auctioned in two different ways – initially, they are auctioned separately and then they are auctioned together. They are sold as a pair only if that price beats the two independent prices combined. The feeder cattle are further divided into different grades depending on thriftiness, thickness and frame size. Thriftiness refers to the apparent health of the animal and its ability to bulk up and fatten normally. The thickness refers to the ratio of muscle to bone, which is essentially reflected in differences in the ribeye area. Thus, a thicker animal will normally produce a higher yield of meat. Frame size refers to height and body length as it relates to age. 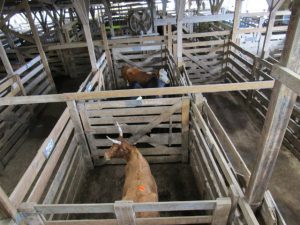 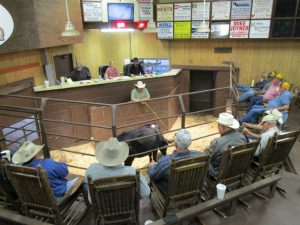 Although the different classifications for thickness and frame size are reported in the final summary by USDA, the auction participants must make their financial bids based on weight and approximately 30 seconds of observation. To the novice eye, the auction is senseless ramblings that assign random values to an innocent animal startled by the audience of onlookers. To the experienced eye, the auction is an opportunity to buy and sell a quality, choice animal that has the potential to produce well over 10 times the initial value invested.