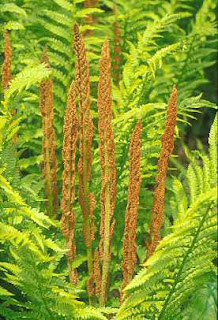 While the name refers to a spice many have come to love during this time of year, Cinnamon Ferns don’t actually produce cinnamon. They get their name from their cinnamon-colored fronds. Cinnamon ferns are fairly large and capable of growing six feet high by one foot wide. They can be found in large clusters of damp woods, marshes, wet ditches, and stream banks. There are two types of fronds in cinnamon ferns: large green sterile fronds and smaller bright green fronds which turn a brown cinnamon-color as they become fertile. The cinnamon-colored fronds are fertile because they are covered with sporangia (a cell structure where spores (reproductive bodies) are produced) to propel new fern growth. In the spring, the fronds in the center of the plant become fertile as they develop their sporangia. These fertile fronds will die back in the late summer once they have lost their spores.
Cinnamon fern is a long lived perennial that does best in moist shaded areas with rich acidic soil, but can also survive full sun if there is an abundance of water. It was historically used by American Indians to treat headaches, muscles pain, chills, colds and snakebites. Frond tips were eaten both raw and cooked. The fiddleheads are edible, and said to taste like a blend of broccoli, asparagus and artichoke. The Florida Department of Agriculture lists cinnamon fern as a “Commercially Exploited Species”. A permit is needed to remove it from the wild for commercial purposes. It is legally available from many native plant nurseries.