Take a sneak peek with this excerpt from the article: The tea shot-hole borer, Euwallacea fornicatus (Eichhoff) (Coleoptera: Curculionidae: Scolytinae) is an Asian ambrosia beetle introduced to Florida, in the early 2000s (CABI 2003). In Florida it does not have any known economic impact, but it is a serious pest of tea (Camellia sinensis (L.) Kuntze) around the world. This species is one of the few ambrosia beetles that can infest healthy plants. It has been recorded from more than 48 plant families (Danthanarayana 1968). Occurrence of the shot-hole borer in tea is reported from India, Sri Lanka, Indonesia, Malaysia, China, The Philippines, New Guinea, Vanuatu, Fiji, and Hawaii (James 2007). The population in Florida has not caused any damage to local trees, but populations currently classified as the same species have been introduced into California and Israel, where they are causing extensive damage to avocado and other commercial, urban and natural vegetation (Eskalen et al. 2013, Mendel et al. 2012). It is likely that these destructive, genetically distinct populations constitute a separate species, closely related to the tea shot-hole borer.

The tea shot hole borer belongs to the tribe Xyleborini, a group comprised entirely of ambrosia beetles that are engaged in symbiotic relationships with ambrosia fungi. In the case of Euwallacea fornicatus, the symbiotic fungus is Fusarium ambrosium (Gadd & Loos) (O’Donnell et al. in press). Adult beetles carry the fungal spores in mycangia, which are special organs located in the oral cavity of the head. This fungus is not only a nutritional symbiont of the beetle, but also a weak plant pathogen, possibly facilitating colonization of twigs and branches. 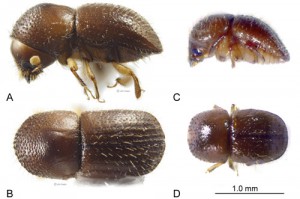